Mom and Dad moved from Spedden to the Ferguson Flats district in March, 1945, with a hope that they would have better luck at farming here. They sold the one quarter of land in Spedden and bought three quarters from John Salmon in this area. Dad came with his team of horses first and brought the binder with him. They shipped 15 cows, 2 hogs, and their furniture by train from Spedden. Mom and the three oldest boys, Harry, Billy and Donnie came a week later by train. Her sister, Tilly, and her father, who lived with them till he passed away in May, 1953, came with them.

A year after the family had moved here, the team of horses got out and went all the way back to where they came from in Spedden. Mom's sister wrote telling us where they were so Dad had to go by train and bring them back here. 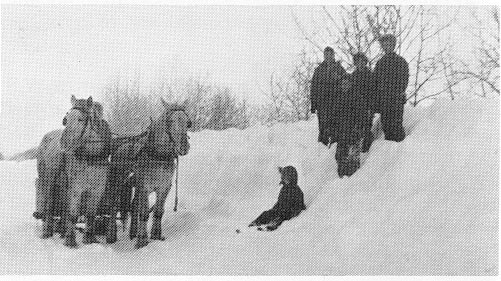 In the spring of 1948, our home caught fire during the night. It started from a smudge that Dad had made earlier in the evening in an old pail and set it on the wooden steps to keep the mosquitoes out of the house. Everyone went to sleep, forgetting to move the smudge pail off the steps, which caught on fire. In the porch was a gallon of coal oil and also some gas, all which added to the flames spreading wildly. When Mom got up to feed Elsie, who was five weeks old at the time, she detected the fire. As arry took the small children out, Mom and Dad tried to rescue some of their belongings. However, all they managed to save were a few quilts and pillows, their sewing machine and washing machine which they threw out the window. The fire spread rapidly and all else was a total loss. They walked to their neighbor's, the Muller's and stayed there for a couple of days Mom then took the family and went back to Spedden for a couple of weeks while Dad stayed here and cleaned up and fixed up the chicken house for us to live in until the new house was built. Mr. Muller canvassed the community for money to help them to rebuild. All the family attended school in Ferguson Flats. They all either walked the two miles to school or later drove the team, especially during the winter. 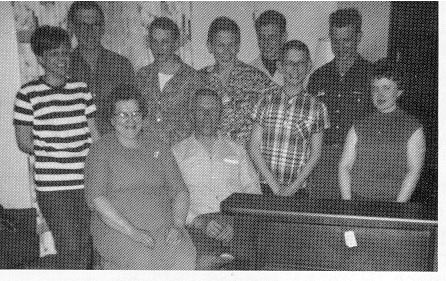 1968: Nick and Pearl Zapesocki and their family on their 30th Anniversary.

Pearl and Nick are seated.

In the fall of 1956, Donnie became ill with the Asiatic flu. After staying home for two weeks, he returned to school and suffered a relapse. Mom and Dad took him to the hospital where he passed away two days later.

After leaving school, Harry had to assume much of the responsibility on the farm. He has remained at home, and at present is farming the home place. Billy, our second son, married the former Edna Martin. He lives on a farm in the district and works at the Salt Plant. They have two daughters. Eddie married Marlene Wutzke, and is farming in the district with his brother Harry. They have a girl and a boy. Elsie, their only daughter, is married to Sam Buzak and lives on a farm just out of Edmonton. They have one little girl. Metro, married Shirley Dacyk and is apprenticing for a plumber in Edmonton. Russel is apprenticing as an electrician in Edmonton and Fred, their youngest, is also working in Edmonton. Mom and Dad have retired and are now living in the new home they built on the farm. Marlene and Eddie are living in the house previously occupied by the family.