In the year 1903, Dad left Norway to make his home in Canada which at that time was a comparatively new country. He worked out in British Columbia in the mines and also in lumber mills and I'm sure he said he was down in California for a short time; mostly doing whatever kind of work he could get. When he worked in the timber country of B.C. someone had given him a pet bear cub, but one day it bit him on the ankle so he promptly gave it away to another man. So far as he was concerned it was the end of his pet.
In 1909, he went back to his homeland and there he and Mother were married. He came back to Canada in the spring of 1911. He considered settling in the Minburn area but then decided to come further north and in May, 1911, he filed on the homestead N.W. 27-57-5-4. At that time you broke up 30 acres in three years, paid your ten dollar fee, and applied for your patent. At that time the post office was Tyrol, later it became known as Mooswa. In later years it was renamed Lindbergh after Colonel Charles Lindbergh who was a great flyer at that time. Our district was named Ferguson Flats after the pioneer W.R. Ferguson who lived three miles north of us. 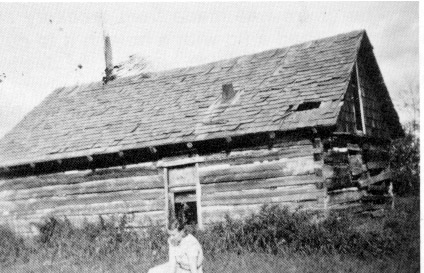 In August, 1911, Mother came over to be with Dad and at that time I (EIsa) was six months old. Mother had a real rugged trip over. She became deathly sick from seasickness and couldn't speak a bit of English. While she was so sick some other people on the boat looked after her baby; she said it was days before she even knew what had happened to me or I guess even cared what became of me. Eventually she got better and after three weeks arrived on the east coast. From there, she travelled west by train. She came to Kitscoty where Dad met her with horses and buggy and brought her to her new home which was a log house with two small rooms, but he did have it shingled which was something then as most homes just had sod roofs. I know the little barn he had built had a sod roof and when it rained real hard, as it did so often in the early days, the poor animals were pretty damp.

That first winter was very lonely for Mother as she couldn't speak any English and her neighbors were few and far between. As time went by she learned to speak the new language and made friends with other pioneer mothers. When the homestead was proved up, Dad grew restless and decided to try his luck in the United States. He went to Minnesota and settled in the city of Minneapolis and Mother and I were with him. While he was there he worked for the railroad company and Mother was quite happy there. In 1915 Lloyd was born and as time went by, Dad grew restless again so in 1916 we went back to Canada and the homestead. Times were very hard but Dad wanted to be his own boss and he thought he would like to farm.

When we returned to the farm Dad bought a yoke of oxen and a walking plow and broke up some land. The work was slow and hard, but when he got the land ready for planting after it was harrowed, he seeded it by broadcasting. This was done by putting as much seed as you could carry in a sack strapped on your body and then throwing the seed on the prepared land as evenly as possible. Then it was harrowed again to cover it. The only thing we could raise in those days was green feed because we always had hard early frosts.

Dad also bought four cows and some chickens. From these cows Mother saved cream to churn into 'butter. The churn was made from crockery about 28 inches tall, had a lid with a hole in it to put the dasher in, and by hand you brought the dasher up and down in the cream to splash in the churn till it became butter. It was a very tiresome chore. Mother would then wash and print the butter in one pound size bricks which she took to the store and also whatever eggs she had to trade for groceries.

In those days we had to depend on wild meat such as moose, deer, rabbit, and prairie chickens for our meat, and wild fruit such as strawberries, raspberries, cranberries, blueberries,. and saskatoons for our preserves. The wild fruit was really tasty, much more so than the tame fruits of the present time. There were times when Dad couldn't afford to buy tobacco and Mother her coffee which she really enjoyed, but we overcame the coffee bit by taking wheat, parching it in the oven and grinding it in the little old fashioned coffee grinder and then brewing it as you would coffee. It made a good substitute.

In the summer of 1918, Dad rented one quarter of land from a neighbor, Ed Clydesdale, who was leaving the farm. Eventually he bought this land. He sold the oxen and bought a team of horses in Vermilion, 60 miles away. He walked there and then led the horses all the way home. He acquired more machinery and little by little he got more land broke, but still times were very hard. The land which he had rented had a much bigger house on it so we moved in to have more room but it was an awfully cold house in the winter. That summer of 1918 I started school. We went to school in the summer only as we didn't have clothing that was warm enough for the kids to walk to school with bad roads and all then.

With the addition of two more brothers, Carl and Melvin, there were now four of us kids to feed and clothe. Mother sewed all our clothes on a sewing machine she had brought from the States. She used to make our clothes from hand-me-downs or whatever she got her hands on. She used to sew far into the night by the light of a small coal oil lamp. Many times I would wake up at 2 or 3 in the morning and she was still sewing. I often wondered if she ever slept.

In 1923 or 1924, Dad built a new log house on our homestead as what we had been living in was so very cold. We were now somewhat closer to school. It was built where the present house stands. In the years to follow, three more children were born, Lilly, Arnold, and later John. Mother still did all our sewing besides hauling much of the water for the house up the hill by hand. Gradually things began to improve although we didn't have much money, except for the most important items. As the older boys began to help Dad in the fields, things became somewhat easier. 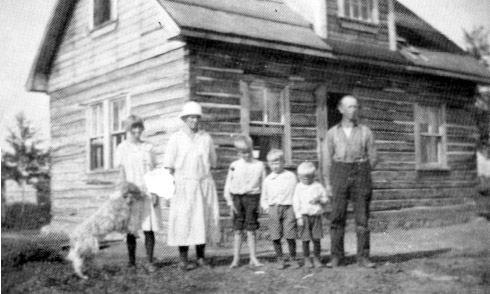 1925 - Mr and Mrs Ockerman with Elsa, Lloyd, Carl, and Melvin in front of their new home at that time

In the early days we kids had to hunt cows on foot on the open range. When we started out to look for them we really were never sure where we were going to find them. We would start out about 5 o'clock and sometimes it was almost dark when we got them home. Then the cows would have to be milked, calves and pigs fed, so it was sometimes pretty late when the chores were all done. 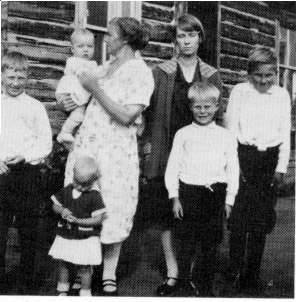 In 1933 I was married to Delore Nelson and went to live in the Clandonald district. It was about that time that the depression started and then times were really hard. For an eight gallon can of cream I remember getting about $1.85 and from 5 to 8 cents a dozen for eggs and a 2 year old beef was worth about $12.00. I remember someone saying they had sold a cow and she didn't even pay for her freight charges. Although things you bought weren't as high as the prices of today, you still had to pay more for what you bought than what you received for the things you sold.

In 1937 Dad built a new house on the same place as our log house. This is the present home of Arnold and his family.

In 1939 the Second World War broke out and the price of meats, grains, and most produce came up in price and people began to prosper. By now the family was growing up and all were able to help at home. 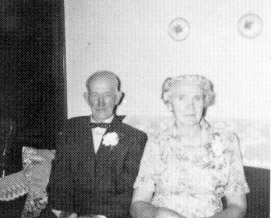 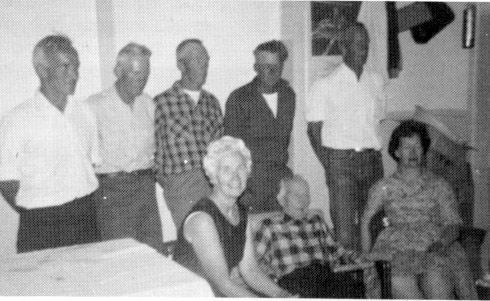 When the boys were old enough to do most of the work, Dad let them take over most of the farming. Mother and Dad continued to live on the farm. In July, 1959 Mother passed away. Dad spent his last years living amongst the family until he passed away in Feb.1971.

In 1967 Delore and I retired in Vermilion. Vernon, our son, and his wife Susan and four children took over the farm. Lee, the oldest son, and his wife Joan and 8 children farm 1/2 mile south of the home place. Helen, our oldest daughter and her husband, Frank Schmidt and family of seven children live in Drumheller. Anna and her husband, Peter Lakusta and two children live on a farm south of Lloydminster. Leslie, his wife Marge and family live in Edmonton.

Lloyd farmed for a while but left it to work out. He went out to British Columbia where he was employed in lumber camps. He is married and has two sons.

My sister Lilly and her husband Harold Swanson live in Fort Saskatchewan where he is employed at the Sherritt Gordon. They have a son Ricky still in school and a daughter, Beverly married and living in Edmonton.

Carl, Melvin, Arnold and Johnnie all live in Ferguson Flats.