Around 1920, the Simpsons bought the John Sloan place and moved in. The house was a two storey frame building and is still standing there today. They had no children when they came. About 1926, a son, Jack, was born. Jack took his schooling at Fern Chapel. Mr. Simpson didn't do much farming as he was a travelling salesman.

He left  his wife and Jack on the farm while he travelled extensively, making a living for them. In the fall of 1940 they had a sale and left for British Columbia. 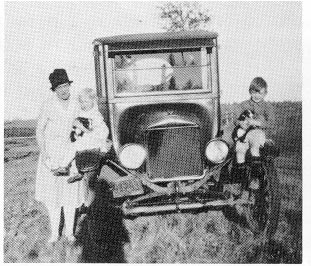 1929: Mrs Simpson beside her car with Lilly Ockerman and Jackie Simpson