John Hillebrand and his friend Barnie Huniki left their village in Germany in 1913 to come to this new world and a new life. His friend continued west to Alberta and took a homestead in what was then the Ferguson Flats district but John chose to remain in Winnipeg where he secured a job as a butcher, a trade he had learned in Germany. However, after some time he wished to see his friend so he, too, came farther west. While visiting here, he was persuaded to stay and soon he also took a homestead, N.E. 9, Township 58, Range 5, W. of the Meridian. Here he built himself a log cabin with a sod roof which was his home for many years. John did some farming, but he also went out to work for others. He loved to hunt and trap and did a lot of this during the winter seasons.

In 1930, John Hillebrand sent money for a fare for a certain young lady who was a friend of his family in Germany who also wished to travel and see the new country. It was an adventure she looked forward to but the long boat trip and many miles of travel was more than she had expected. Arriving in Elk Point in December, Helen was met by Mr. Huniki in his new car. She was a guest in their home until she married John two weeks later in Bonnyville. They moved to the homestead into a new house John had built to replace the log cabin. 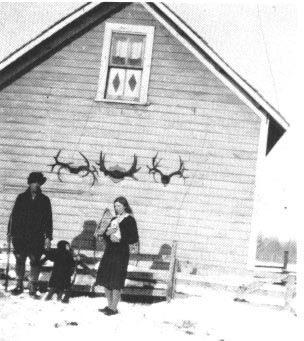 Mr and Mrs john Hillebrand and son Eddie beside their new home on the homestead.

Mrs. Hillebrand experienced great loneliness and homesickness as she tried to adjust to the new country, and to learn to speak the new language. Much as she would have liked to return to her homeland, there was no turning back. Except for Mrs. Dobson and Mrs. French, most of her neighbors were bachelors. However, she gradually accepted her fate and adjusted to a life she found so different from what she left behind.

Mr. and Mrs. Hillebrand worked hard on their farm. They acquired a number of milk cows by trading horses. At one time they milked sixteen cows by hand. They often traded their produce at the local grocery store. Since John was a great hunter, and trapper, he supplemented their meat supply and income by selling pelts.

In 1933 their first son, Eddie, was born. Then a daughter, Elsie, joined the family. As the family increased, there was additional work. Mrs. Hillebrand always had to help in the fields where she would have to take the children with her. When she would be stooking, she would set them in a stook and check on them from time to time as she came around. She recalls a time when she set Eddie beside a stook and when she came to check on him, she had forgotten which stook she had set him near. After a few frightening moments, she found him, safe and sound just as she had left him. In the evenings she had all her household chores to do. That was when she did all her sewing. She would sit late into the night sewing by a little coal oil lamp for light. This was hard to accept as she had been used to electrical power in Germany. 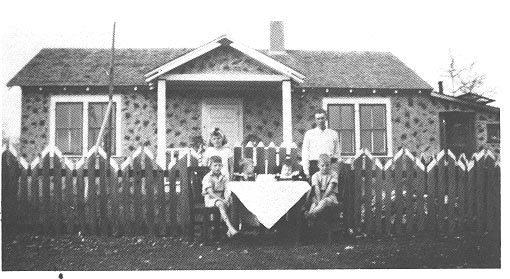 In spite of all the hard work, Sunday was always the day of rest. Mr. and Mrs. Hillebrand always went to church and often drove the team to Elk Point to attend Mass. Everyone went visiting on Sunday afternoon and it was a time all looked forward to. People did not work in the fields on Sunday and all respected this day as a time to enjoy with their family and friends. In 1939, they bought land that was nearer to the school, located at N.W. 24, Township 57, Range 5, West of the 4th Meridian. Here they built a new home where they resided until their son, John, took over.

Mr. and Mrs. Hillebrand raised a family of five boys and one girl. As the years went by, the children were able to assist their parents with much of the hard work. They acquired more land and modern machinery and through the years have made great progress. 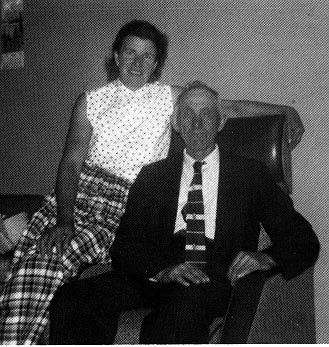 John Hillebrand passed away in Oct. 1959. Mrs. Hillebrand continued living on the home place until 1970 when she moved into a new home on N.W. 34-57-5-4 and lives there with her two sons, Kenneth and Raymond. The oldest son, Eddie, who married the former Ella Ashby, farmed in the Ferguson Flats district for a number of years before moving to Fort McMurray where he is presently employed. They have a family of five girls and one boy. Elsie, who is married to Bill Greckel, lives in Edmonton. They have two girls and one boy. Kenny, Walter, and Raymond are still single and farming in the district. Johnny married the former Elsie Byck of Bonnyville, and is living on the home place. They have two sons. Johnny is farming and also employed at the Canadian Salt Company in Lindbergh.

As Mrs. Hillebrand reminisces about the past, she regrets the loss of the  past as she found that although people worked hard and had less, they had time to enjoy life and the company of others. At tbe present time everyone is too busy and people are less content in spite of much  more that they possess. As to what improvement she has enjoyed most in recent years, she does not hesitate to say the coming of the power was above all the greatest of modern conveniences. 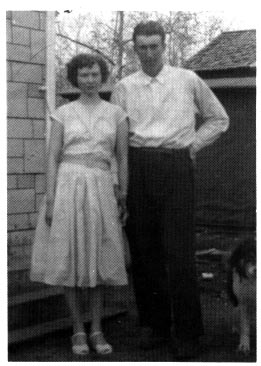