We moved to the Ferguson Flats district in July, 1952, from Lindbergh. The quarter of land we bought was one mile east and a half mile south of the Ferguson Flats school corner. Besides farming, Kore did carpenter work around the country. Some of the people he did carpenter work for were; Carl Ockerman, Melvin Ockerman, Gay Heffernan, Archie Allen and Charlie Martin. He also helped Art Ashby build a house in 1954, when his old one was destroyed by fire. Kore also worked on houses in Lindbergh while we were living at the Flats. 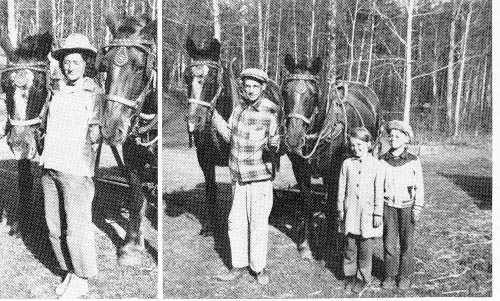 Grace and Kore Lien with Edward and Ellen

Our two children, Edward and Ellen, attended the Ferguson Flats school while we were living here. We farmed there until 1956 when we had a sale, and moved to Elk Point. We lived on a farm ten miles west of Elk Point in the Stoney Lake area until the summer of 1974 when we held a sale and have now retired in Elk Point. There are just the two of us here as Ellen and Edward have homes of their own.