My father, Joe Martin, and family came from Lisco, Nebraska, U.S.A. to Canada in 1914. We arrived in Vermilion on April 4th. There were ten of us in the family; Dad, Mother, Mary, Lewis, Margaret, Fred, Edna, Bill, Esther and Charley. We travelled by train to Vermilion and Uncle John McClain was there to meet us with his team and wagon. On our way out we spent some time visiting. The Laughlin's were living somewhere between Vermilion and Islay and Dunham's were living in a Braithwaite house near Dewberry. From there we came on up to Ferguson Flats to Grandpa and Grandma McClain's place. We stayed there, with my grandparents, a while as we all took our turn with the red measles, which we had been exposed to on our travels. Then we moved to the Clydesdale house on the hill and lived there for the summer.

Back of Fred is Ann Martin with Esther in arms, the other 3 at back are aunt and 2 cousins

My Dad homesteaded the N.W. 27-57-54 and with the help of Mr. John McCuen, a carpenter, they built the log house there which still stands today. We moved into the house that fall of 1914. There were six of us children to go to school then. Our first teacher at the Fern Chapel school was Miss Vivian Kennedy. We walked straight across country from the homestead to the school, about one and a quarter miles, and soon had a good beaten path. The Salmon family moved into the district soon after us and May, Velma and Mildred came our way so we all walked to school together. In the winter of 1918 a bad epidemic of flu hit the district and my brother Lewis, age fifteen, died from it in November. He was the first to be buried in what is now the Ferguson Flats cemetery. 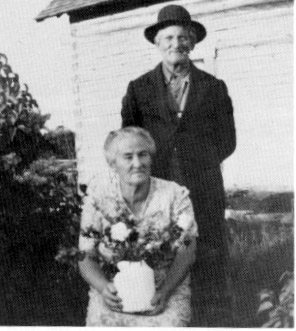 Mr and Mrs Joe Martin taken on their homestead in 1945.

My parents practically spent those years right on the homestead. Dad tried to farm a little, mostly for feed and saw hard times along with everyone else. As I think back now I can recall how we enjoyed ourselves then, but things were so different from today. I once heard a minister ask my dad, 'How come you settled here? Dad replied, 'Well it sounded good and I came here and then never could get enough money to make another move'. After Mother passed away, Dad and Joe carried on at home for a while. Then Dad visited around here and there with his children and was staying at my sister Margaret's at Kelowna when he took sick. He went to hospital there, where he passed away later. He was sent back here for burial in the Ferguson Flats cemetery. 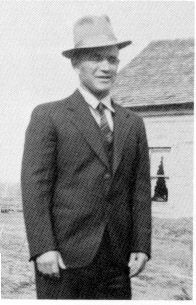 Charley passed away February 10th, 1956 and is buried in the Flats cemetery too. Bill passed away August 9th, 1960 at Vernon, B.C. Mary passed away October 21st, 1970 at Kelowna. The remaining of the Martin family are: Margaret (Mrs. H. Ketchum) of Kelowna, Esther (Mrs. B. Lumley) Mission City, B.C., Joseph at Vernon, B.C. Fred at the time of writing is residing in the Vermilion Valley Lodge. I, Edna Darling, am living in Lindbergh.

Daniel Allen owns the Joe Martin quarter now. He bought it in January 1961. He has made quite a change in the place by having some brushing done and land broke up.