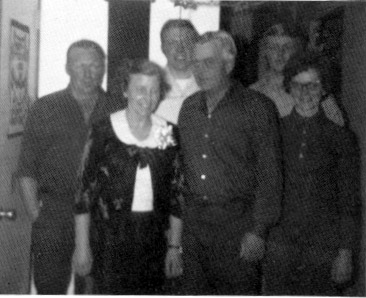 1972 Leatha and Melvin Ockerman and Carole with Robert, Randy, and Myles at the back.

Our oldest son, Robert, after leaving school, drove a caterpillar for Mr. Steinke, spent one winter building the bridge at Heinsburg, worked as repair foreman for United Grain Growers at Manning, Alberta. He later moved to Coaldale where he married Mary Nichol. They have two sons and two stepsons. Robert worked for United Grain Growers for six years and is now foreman for Klassen Construction of Lethbridge.

Carole, after graduating from high school, worked in the bank in St. Paul and was later transferred to Elk Point. She married Terry Peterson in 1967 and lived in Elk Point for five years until Terry passed away in a tragic accident. Carole then went to work for Dr.  Didow and started taking a dental assistance course. She is presently working in the Toronto Dominion Bank in Red Deer and completing her dental course.

Randy graduated from high school and spent the next three years helping us on the farm. He is now employed at Lethbridge at Swift's.

Myles also graduated from high school and is working at the Miserecordia Hospital in Edmonton. He plans on attending N.A.l.T. in April to train as an orderly.

On June 19,1974 we had our farm auction sale and are now living in Elk Point.