Robert Bartholomew joined his folks at Ferguson Flats in the fall of 1930. He bought the N.E. 23-57-5- 4 in 1931. He farmed this land until about 1946. In the first years he broke land for himself and neighbors with oxen. He also did his own farm work with oxen for quite a while.

In 1939 he married Katherine Heffernan, a nurse at the Elk Point Hospital. She came to work here to be near her family who had bought land in Primrose. She owned several horses so the oxen were then replaced with horses. Robert was very fond of music and for many years he was a member of the local orchestra who supplied music for dances in this area. He also helped out during the teacher shortage by supervising at the Fern Chapel School. 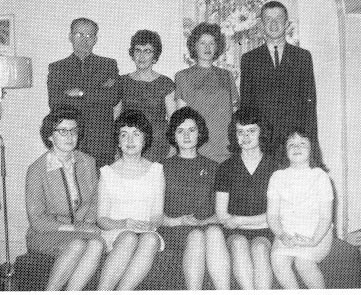 After leaving the district, Robert and Katherine returned often to  visit the many friends they made while living here. They raised six daughters and one son. Gabrielle (Mrs. Eugene Bayduza) has three children and lives at Vimy; Patricia (Mrs. Ron Oster) has three children and lives in Edmonton; Bernice (Mrs. Rudi Antonio) lives in ourtney, B.C. and has two children; Rita (Mrs. Allen Sanregret) of Winterburn has two daughters; Suzan is finishing school, and Mary (Mrs. Neil Nelson) of Lindbergh has three children. Their only son, Robert, and his wife Nadia, live at Fort McMurray. Mr. and Mrs. Robert Bartholomew spent the last several years in Edmonton before their deaths in 1966.