We moved from Frog Lake to Ferguson Flats in the fall of 1939, to  the Roy Gallagher place. Dan was born at Frog Lake in 1914 and I, Laura Louise Maltais was born at Dewberry. Our daughter, Shirley was born at Marwayne and the twin boys, Daniel and Donald were born at the Saranchuk home at Middle Creek, January 5th, 1937. It was forty below zero that day and Dr. F.G. Miller arrived on the scene a few hours after the twins were born. The roads were all blocked with snow drifts and there were no snowplows in those days.

Dan made our living in the wintertime with a wood-sawing outfit, and also ground grain. It was a darn cold job. There was very little cash anywhere in those days but we always seemed to have a good time. I remember one Saturday night in particular, about nine o'clock. We could hear a team coming and a lot of singing and laughing. And here were the neighbors from all over, coming for a surprise party. Robert and Kathy Bartholomew were with the bunch. Robert played his accordion for us to dance to. 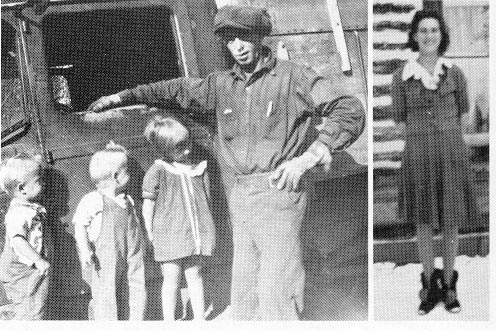 Dan and Louise Gunderson with their children, Shirley, and twin boys, Daniel and Donald.

In the fall of 1940 we had our first crop cut and stooked in the field. Dan was away to Lindbergh, when a fire started up. It began in a peat bog and started across our field towards the timber between our place and Livingston's. I ran to Livingston's for help and Ira got out his team and plow and plowed a fire guard. Harvey Dunham came up on his motorcycle to see where all the smoke was coming from. He soon rounded up most of the men in the district, and the fire was brought under control. If it had not been for helping neighbors at this time, ~t could have been a real disaster. These are things one never forgets and we really appreciated our neighbors. We were very fortunate to live so close to Ira and Ella Livingston, as they were always there to help in time of need.

We left the Flats in the spring of 1941 and moved to Norway Valley. In 1947 we moved to British Columbia and now live in the central part of the province in the Caribou. For several years we operated a sawmill but we are now ranching close to Williams Lake.