Arnold and I (Shirley Ashby), were married in April, 1961. We live on the original homestead formerly owned by his father and in the same house he built in 1937. Arnold has lived most of his life in the Ferguson Flats area. He enjoys farming and is in partnership with his brothers, Carl and Johnnie, in raising beef cattle.

He always enjoyed hunting and trapping from the time he was a young boy. When he attended school at Fern Chapel he used to check his traps on the way there, and then do the janitor work. After school, he would do the same before returning home. He remembers selling 41 weasel pelts for $8.00, squirrels at 25c to 90c per pelt, and coyotes at $1.00 each or sometimes they were worthless. During winter on Sundays for sports activities the young people would often meet to go skating on Frisby's Lake, walking 4 miles there and then back home again in the dark. 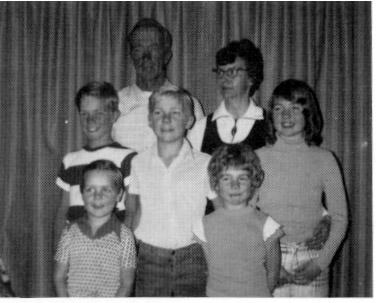 We have five children, Christine, Gary, Marion, Valerie, and Glen, all attending school in Elk Point. They participate in sports, such as hockey, and in 4-H activities in town.