Sam came to the district in 1911 from British Columbia, but had spent some years in the Yukon before that. He was a prospector while there and his wife had a necklace of pure gold nuggets.

One day, in the Yukon, back in 1905, he went into a bank to deposit some gold. The teller was the now famous poet, Robert Service. He liked the sound of the name Sam McGee and asked permission to use it in a poem' he was writing. The poem is the one we all know as "The Cremation of Sam McGee".

Sam's homestead in this district was the N.E. 28-57-5, and he fenced all the quarter, cleared his land and farmed. He was a married man with five children, Olive, Ethel, Herbert, Walter and Hazel. They attended school at Fern Chapel and previous to the building of it, were taught by Lewis Blacker in a building at the Ferguson place. While their daughter, Hazel, was quite young she spent several months in the Vermilion hospital as a result of a ruptured appendix. But she eventually recovered from the illness, which was quite a feat in those days. A son, Walter was killed in early years after leaving school. He was working at Buffalo Lake, slipped on the ice while watering some horses and one of them stepped on his head. About 1920 the family left the district and he went to railroading. 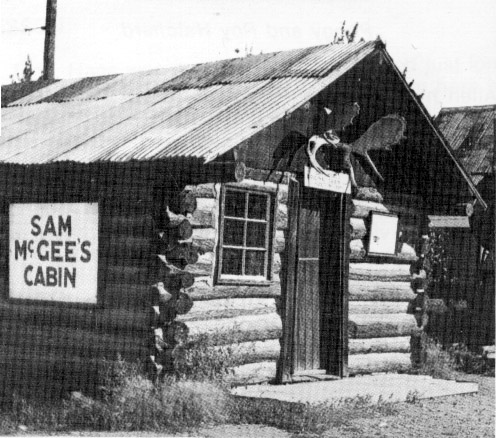 While they lived in Edmonton their daughter, Olive, died from diphtheria. Years later, Sam himself was killed by a bull while working in southern Alberta. The house and barn that he built stood on the old homestead for many years.