Carl and I (Olive Gallagher), were married in the spring of 1943, and lived for three years on Carl's Grandad's place. While living there Carl helped his father farm. The house was very cold during the winter and many mornings the water in the tea kettle sitting on the stove was frozen solid. In 1946 we bought what was then known to everyone as Mr. Wardles place, S.W. 22-57-SA, and have lived here ever since. One of our biggest problems was trying to get water. We had different men come to witch us wells and dug many but with no luck, until May 1972 when a young man from Bonnyville witched a well and then dug it for us. Fortunately it has turned out very good with plenty of water for the house. Later in the summer he came back and dug another well for the stock which also has plenty of water. 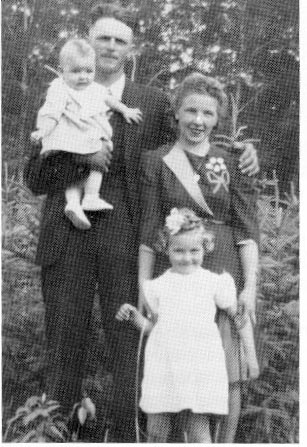 1948: Carl and Olive Nelson with Donna and Deanna.

We have two daughters, Deanna and Donna. They both went to school at Ferguson Flats until centralization and then took their high school in Elk Point. From there they went to Edmonton and took their training and are both Certified Nursing Aides. Deanna married Gordon Fakeley and lives at Riverview (Salt Plant). They have one son Carl, and two daughters Gayle and Melanie. Donna married Lucien Brunet and lives at Chilliwack, B.C. They have one daughter, Deann.

In June 1957 Carl started working at the Canadian Salt Plant and is a vacuum salt bagger there. With working at the plant, farming and looking after cattle, he keeps well occupied. We moved into our new home in October 1972, and when Carl decides to retire, here on our farm is where we will stay.