Charlie Martin and Rosie Phillips were married in 1939. Although Charlie was raised in this district, his bride originally came from Ireland in 1925 and was living in Vermilion then. When they moved into the community they first made their home. They farmed some and later Charlie obtained the mail contract to carry mail to the local post offices. This he did faithfully for a number of years, using his team of horses and later a car. 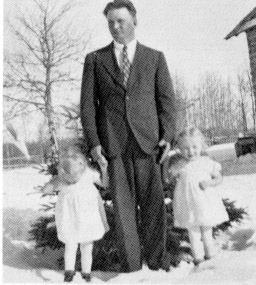 Charley Martin with the twins Betty and Barbara.

Charlie and Rosie raised a family of four girls. Charlie passed away in 1956 and Rosie still lives in the district at N.W. 26-57-5-4. Barbara- (Mrs. Eddie Koppang) has a family of three boys and two girls. Betty- her twin sister-(Mrs. James Brown) has a family of four boys and one girl. Both girls live in Lindbergh. Teresa- (Mrs. Bruno Kummetz) lives in Faro, Yukon and has two girls. Edna- (Mrs. Billy Zapesocki) lives on the farm with her mother and they also have two girls. Billy works at the Canadian Salt Co. 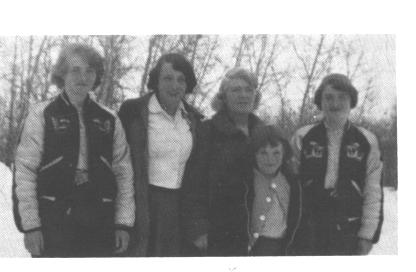