The James Gallagher family moved into the Ferguson Flats district in June of 1918. There were my Dad and Mother, James and Margaret (Maggie) and five children namely, Alta, Roy, Arthur, Florence and Pearl. We moved from Killam, Alberta. 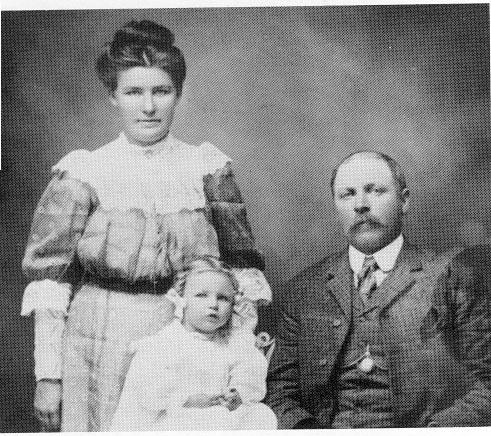 We had lived about a year and a half in the Brosseau district southwest of St. Paul before moving to Killam. We had known the Wilcox family when we lived in the Brosseau district and they moved to Ferguson Flats just before we left to go to Killam. Mother and Mrs. Wilcox were life long friends and through their correspondence and the availability of a homestead is how we moved into the Ferguson Flats district when we did. We moved into a vacant house situated approximately one mile east of the Ferguson Flats schoolhouse. It was at that time called the Old E.L. Blacker Place. N.E. 1/4 Sec. 23 Twp. 57 Range 5 West of the 4th meridian.

Dad sowed a bit of crop, all oats on the old Jim Sloan place which would be S.W. 1/4 Sec. 26 Twp. 57 Range 5 West of the 4th meridian just East of the school on the north side of the road. Everything froze that fall, no grain ripened and the potatoes were very small and scarce.

She was thirteen at that time and couldn't milk, so you can imagine the problems Mother had; a tiny baby, having to struggle out to milk, and care for the rest of the family while she was sick herself. No Doctors were closer than Vermilion, and they were too busy to come out as it was a three day trip with horses then. Dad was out working around Killam and tried to come home but the river was only partially frozen so he spent a day or more trying to get across on foot and then walked home. We were all feeling pretty good by the time he got home.

I must say a few words about Ben French. At that time I don't think he felt too good himself, but he went to see everyone and in our case sawed up a bunch of wood. He dug graves and said a few words at funerals and in one case Ben and Archie Allen were grave diggers, funeral directors, and Ministers. Not many neighbors could have done more.

We lived the summer of 1919 in the Jim Sloan house, but moved back to the Blacker house again in the fall. We never lived on our own place steadily until 1921. Dad's homestead was N.E. 1/432,57,4, west of the fourth where Leatha and Olive were born and where my brother still lives. 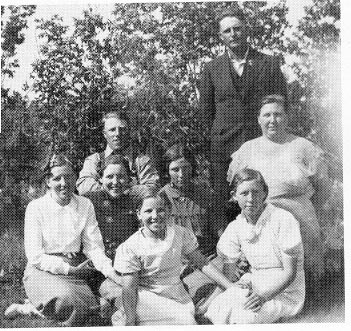 We arrived in the district late in June 1918 and instead of having holidays we had to go to school all through the summer months. When we left Killam, it was just before the school term was out but our teacher passed us and gave us letters to that effect to be presented to the teacher at our <next school. The children in the class of 1918 in the Fern Chapel school, as I remember them, were as follows: Arthur Wise; Herb and Olive McGee; Louis and Leatha Taylor; Margaret, Fred, Edna, Bill and Esther Martin; Mildred Salmon; Elsie Ockerman; Mildred and Irma Ferguson; and Ray and Elmer Wilcox. There may have been a couple more that I have forgotten. Albert Hammond's brother and sister went the following year. Our teacher's name was Miss Eubank, a real nice looking girl--about eighteen or nineteen years of age I imagine. Later in the fall, a young man, Arthur Bishop, from Frog Lake came and took over the teaching duties. Alta, Arthur and myself all went to school at this time. Alta was in grade eight, Arthur in grade two and myself in grade five.