Louis came from Denmark in 1910 or '11 with his mother and sister. He was a young bachelor and homesteaded the S.E.  10-57-5. His mother homesteaded the quarter where Johnnie Ockerman now lives. 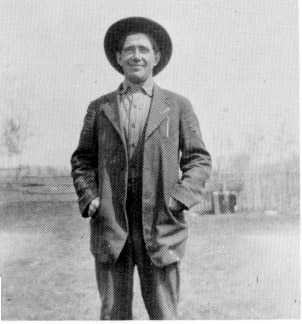 Louis built a nice house on his quarter and it is still standing there today, although it is quite lopsided. Around 1917 or '18 he went back to Denmark where he got married. Arthur Wise Sr. made a deal to buy his place and he and his family lived there while Louis was overseas. But Mr. Wise was unable to make further payments so when Louis returned, he moved up to his homestead farther north. Along with his new wife, Louis lived in his home there and farmed for a while. Later on they returned to Denmark to make their home. She is remembered as being a wonderful singer. His mother went to the States to live. Fred Lorenson rented the land for a number of years. Then in 1948 Louis returned to the district and visited old friends and acquaintances. Before returning to Denmark, he sold all his land to Fred Lorenson. He and his wife have since passed away.