J.T. (Slim) Harris came to the district from Texas in 1912. He was a young bachelor and homesteaded the S.W. 36-57-5. He built a shack and other farm buildings. In later years he had a new frame home built, and we had many house parties there during the winter months. We would play cards, sing and if music was available we would even dance. About 1962 Slim decided to retire and left the district. He visited around in the States for some time and finally settled out at Kelowna where he still resides. 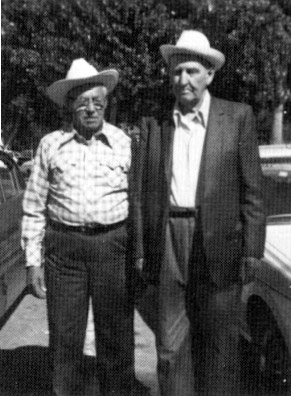 Ira Livingstone and Slim Harris in Kelowna in 1973.