Our trek from Oklahoma began about the 12th of October, 1930. My husband Grover McClain, myself and his three daughters, Edna, Emma and Ella, loaded the most important articles of our belongings into a 1928 Model T Ford touring car and headed north for Canada. The rest of our things we sold or left behind to be sent later. 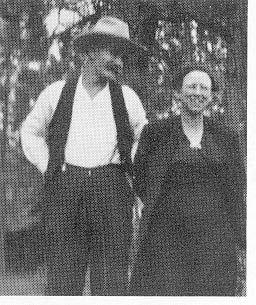 We encountered all kinds of weather and delays of various kinds. There had been a big storm in the northern states as well as in Canada. At Emerson, Manitoba we crossed the border and finally got to the Saskatchewan River at Lindbergh, late in the evening of October 31st. The ferry there had been taken out for the winter so we couldn't cross there. A friend of Grover's, Gus Gamier, lived a few miles south and we went back there and spent the night with them. Grover had met Gus in 1910 when he came to Canada with his parents, Mr. and Mrs. Sam McClain. The next morning we drove to Heinsburg and crossed the river there.

Late in the evening of November 1st we arrived at Grandma McClain's homestead where she lived on the S.E. 35-57-5, west of the 4th meridian. We lived there for the next seven years, Ieaving there for British Columbia in October of 1937.

Edna, Emma and Ella attended school at Fern Chapel and their first teacher was John Homby, who taught them for two years or so. Then Miss Margaret Lorenson taught for the remainder of their school days. During the time we were in this district we had three sons and a daughter, the daughter being only six months old when we left for British Columbia.

All of our family are married and settled in various places. Edna lives in Nova Scotia; Emma, George, Jim, Eldon and Christine all make their homes in British Columbia; and Ella lives in California. Grover passed away in the spring of 1969. I make my home in Kelowna.

Looking back on my life in the Ferguson Flats district, I find it remarkable how everyone seemed to enjoy life to the fullest, despite the hard times. We just took the good with the bad and they were happy days for us all, back there in the '30's.