Mr. Bacon came to his homestead around 1918, from Minnesota, U.S.A. He cut logs for his small house down by Chris Nelson's. At one time he had been married, but lived alone after coming to this district. During the fall months he had a good job working on the Blood Indian Reserve near Calgary. 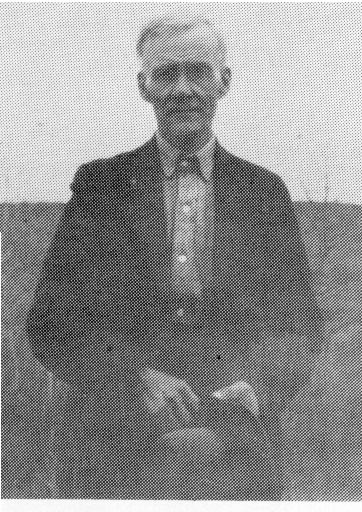 He would drive a democrat and team around from place to place there, repairing their binders for them. The winter months were spent on his homestead. By working out like this each fall he was able to hire much of his farm work done. With the advent of the combines to that area, he was out of a job. The Indians eventually switched over to combines and his repairing services were no longer needed. A sister, Mrs. Marble used to come and visit him during the summers sometime. She came from Saskatchewan. She would get out and pick berries and do some canning for him. He was a good cook himself and nearly anyone in the district can attest to the crispy, tasty ginger-snaps he baked. In his later years on the farm his brother and wife from Southern Saskatchewan came up one fall to visit him. They took him back for the winter. When he came back in the spring he stayed with Chris Nelson's in a little bunk-house in their yard. Later he moved to Elk Point and boarded with Mrs. Robinson. His health was failing and he wanted to be nearer a doctor. He stayed there a while and then moved to near Edmonton where he was being cared for. It was probably in the late 1930's when he passed away there.