Our daughter, Effie attended school at Ferguson Flats and took her grade nine at Ashmont and boarded there. Then she met Bruce and they were married in July 1951. They lived on N.W. 10-58-5 and had the S.W. 15-58-5. They spent sixteen years in this area and most of it in the Ferguson Flats district. There were four children in the family, Wesley, Faron, Harley and Laurie Ann, and they were all born in the Elk Point hospital. Bruce worked at the Salt Plant for some time. Then he rented land south of Lindbergh for a while, but later bought land here from Roy Hatchard. Then they moved the house on to our place as the school bus couldn't get over the poor roads where they lived. They raised cattle and then when the call for men to work at Fort McMurray came he went there to work. The family moved up later in 1967 and they are still making their home there. 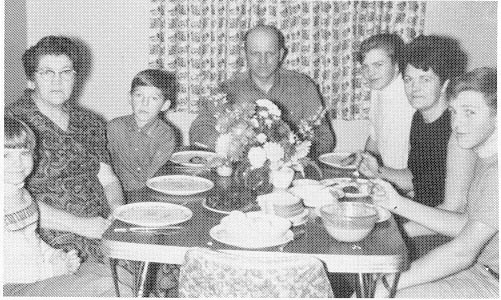