I lived in the Ferguson Flats district along with my mother and step-father, Barney McConnel, from 1939 to 1945. Our closest neighbor was J.T. (Slim) Harris who now resides in Kelowna. Our place was the old McClain farm and it was on the main road between the Frog Lake and Long Lake Indian reserves. So it was a favorite stopping place for the Indians, and my step-father used to trade horses with them a lot. Other neighbors I recall were the Hillebrands, one and a half miles to the south, and they had a girl and boy at that time. Archie Allen lived a little farther south and was a bachelor. Albert Hammonds lived near the school and they had Florence and Raymond. Tom Alien family liyed a mile west of us and they had an older boy, Daniel, and a young girl, Dorothy who went to school with me. Ben French lived north and west of us and they had a girl. I still remember her bright red hair and the long ringlets. Then there were the Dobsons, who had a store, Ockermans, Nelsons and Philipps.

I attended school all the years we lived there. The only teachers I remember were Mr. Smith and Mrs. Roy Hatchard. I recall one incident that occurred when Mr. Smith was living in the teacherage (the old blue house) about a quarter of a mile east of the schoolhouse. A fire somehow broke out in it and all the school kids were called out of school to help put it out. We formed a bucket brigade and got the fire out, and had most of the afternoon off from our studies. This pleased us all, you may be sure. I can still picture Mr. Smith, with his head poked up through the roof, fire all around him, grabbing the buckets of water that us kids were handing him. It looked so funny to see his bald head sticking out there with charcoal and smoke all over it and his face; and sweat streaking down over it all. I often think of that incident and chuckle over it. 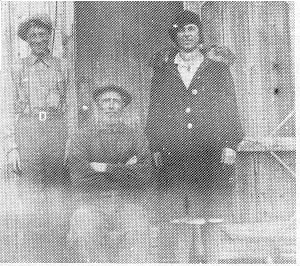 Mr and Mrs McConnel and Bert

When I was about nine years old, I remember another amusing thing that happened to me. I had some traps set for gophers in an old abandoned field. While checking on them one day I discovered one of the traps was missing and there was a drag mark where something had dragged it away. I followed this mark and it disappeared into some low scrub brush. I plowed right into the brush, not thinking of what may be in the trap. As a result I almost stepped on the skunk that I had caught! Fortunately for me, my dog distracted the skunk and prevented me from getting sprayed. But I was determined to get my trap back and bravely took a stick and proceeded to kill the skunk. You can imagine the reception I got when I arrived home. I wasn't allowed to come in the house and I didn't know why as I couldn't smell a thing. I had to strip off all my clothes and bathe in about three of four waters, and still Mother and Dad had to hold their noses. Needless to say, I didn't kill any more skunks in that manner again.

We had a pet skunk one time, which we kept in a cage but he had not been descented. One day an elderly widow, whose name I cannot recall, came to visit us. Upon seeing the skunk and thinking it was a domestic cat, she started toward its cage. We warned her that it was a skunk and it may give her an unwelcome perfume bath. But she thought we were only teasing her so she continued on to the cage and put her hand out toward it. She began talking to the skunk, saying 'pretty kitty, pretty kitty' and it proceeded to give her a nice shower with his special perfume. She jumped back, shaking her fist at the skunk and said 'Oh, you naughty thing, you! 'I must say she was a little angry with us for not teaching our pet better manners.

One event that us kids, as well as the adults, looked forward to each winter was the surprise parties at different houses. The people in the community would get together at one of the neighbors homes, with everyone taking some lunch. The dancing and good times would go on til four or five in the morning. Many would get home just in time to do their morning chores. Everyone would enjoy themselves and rarely did anyone get too much to drink: I remember the time the neighbors surprised us with a party. We were afraid that they would not be able to dance on our floor as it had been 'made from two inch planks and was so badly worn. The knots stuck' up almost a half inch and we were afraid they would trip over them. But a little thing like that didn't stop them. They had come to have a good time and so they did, knots or no knots. They had to step a little higher but managed to dance all night. These parties were an annual event until the hall in Primrose was built and that sort of ended them.

We left the district in 1945 and I have not been back since. My parents live at Ponoka, and I at Oyama, B.C.