My parents came from Oklahoma, U.S.A. in the spring of 1910. We came to Vermilion to my Uncle John McClain's place, where he had settled some years before. Mother's parents, Mr. and Mrs. Samuel McClain; two of her sisters and one brother came along with us. That summer my father and grandfather went looking for land. My father found a place at Tyrol, which is now Lindbergh, and filed on N.W. 3-56-5. Grandfather bought a place at Ferguson Flats.

In the spring of 1911 we moved from Vermilion to Tyrol. I rode with my father in the wagon, drawn by a team of oxen. All our belongings were in this rig. Mother had a buggy with One horse and sister Ruth and brother Bill rode with her. We lived in a tent until my father got the house built. It was in this house that I was married and my first two sons were born there. It was also this place where my brother Harvey was born. 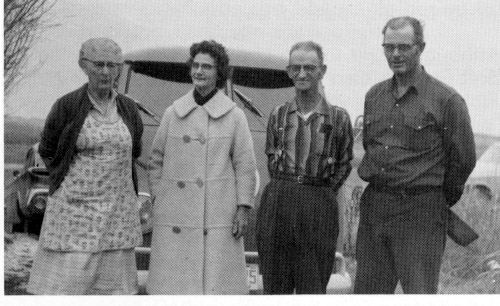 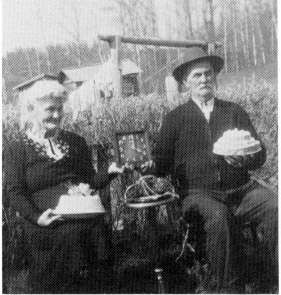 The family moved to Meadow Lake in the fall of 1922, where they ranched for a while. Then they moved to Ferguson Flats to the S.W. 3-58-5. This place had been homesteaded by Nels Thorsell in earlier years. They resided here until 1946 when they moved to Lindbergh on the S.W. 3-57-5. My folks celebrated their Golden Wedding anniversary on May 23,1947. They took their first real holiday trip that summer and went to British Columbia. Dad took sick while there and passed away later that same fall. Mother continued living on the place until the time of her passing in March 1966. Bill and his family now live on the home place. Ruth makes her home in British Columbia. Harvey is married to the former Mildred Lemecha of Primrose. They have two sons and live on a farm in the Primrose district. I now live in Elk Point.