Mr. and Mrs. Hugh Stewart moved to the Ferguson Flats district in 1942. They purchased the Matt. Dobson farm, S.E. 2-57-54 and resided there. The store, and post office, formerly operated by Mr. and Mrs. Dobson, were taken over by them and they continued this business for several years.

The family consisted of one daughter, Mary, (myself), and two sons, Charlie and George. George attended school there, but both Charlie and myself were through school at the time of our move. In 1947, I married Gerald Duckett of Lacombe. We still reside on a farm there and have a family of four sons and four daughters. 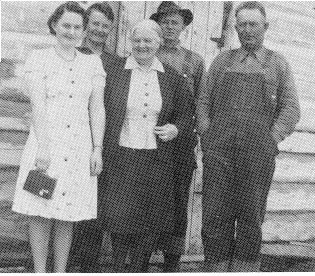 In 1951 my folks lost their home by fire and that brought things to an abrupt end in the Flats district. Soon after their loss by fire, they left the district in 1953 and went back to Vermilion. After living there for about two years, they moved to Edmonton where they are residing at this time.

George married Bonnie Humford of Edmonton in 1952. They make their home in Edmonton and have a family of two daughters and two sons. In 1958 Charlie married Phyllis Winsor of Newfoundland and they have two daughters. They are living in Vancouver.