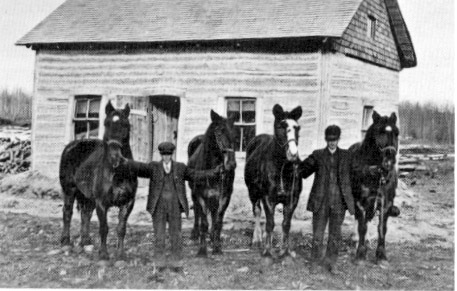 Bert and Archie Allen with their horses

My Uncle Archie left Chesley, Ontario and came west to Summerland, B.C. where he worked for some time before coming here to Ferguson Flats with Sam McGee. He homesteaded on N.W. 13-57-5-4 and farmed it, but in the winters he worked out logging. He was a lover of horses and had many good teams. He used to freight goods from Kitscoty to the Ferguson General Store here during the early days. He also put up a lot of hay which he sold. In later years he bought a tractor and truck and remained on the farm until he was almost 80 years old. He then moved to the Vermilion Valley Lodge in 1965 where he lived until his passing in Sept.1968 at the age of 82.