I was born in Oklahoma, U.S.A. in October 1898 and came with my parents, Mr. and Mrs. Caleb Dunham, to Canada in 1910. At Vermilion we were met by my uncle, John McClain as this was the end of the railroad line at that time. Here is where I had my first sleigh ride, for it was winter and he met us with team and sleigh. We had to go down the river part-way to his homestead in the Islay district. We spent a year with Uncle John until my father filed on a homestead at Lindbergh, which was then known as Tyrol - and a few years later as Mooswa. Log buildings were built and then we moved up by oxen. 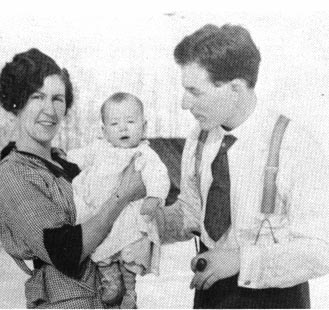 In 1917 I married R.K. Martin, who was a school teacher and also a trapper. We both had a great interest in the outdoor life, which has never left me. When R.K. was teaching at Fern Chapel, right after we were married, we lived in a two roomed house just across the road to the north, from the school. One room was occupied by us and the other by Mrs. Gamier (mother of Gus). She had her grandson Louis staying with her so he could attend school there. Each room had a separate outdoor entrance and also a door between the two rooms so we could go back and forth into each others residence. Later on in this term we moved to the house on the Sloan quarter, which was east of the school a short distance.

When school was out in 1921, we left our two children with my parents and went by train in July to Rocky Mountain House. There we built a log raft and started out on a two week holiday trip down the North Saskatchewan River to Mooswa, while my husband prospected en route. This was a very interesting and exciting trip. After we got started, the raft was going so fast that I thought if I ever fell off my husband would never be able to get to me. So I tied a rope around my waist and then to the raft. This my husband laughed at, but soon I noticed that he was doing likewise! Another moment of excitement was when we got into a whirlpool. The raft went round and round with me on the high end and my husband on the low end. He had to work very hard for a few minutes, but finally we shot out and continued on our way. We camped at nights on the river banks. One night we made camp on a sand bar, and I awoke in the morning with wet feet as the river had risen during the night.

There were amusing moments too. One night we camped at a deserted farmyard. Since passing Edmonton I had not cared to use the river water for cooking and drinking because of all the waste that was emptied into it, so I kept a bucket of spring water with us. During the night a friendly---and apparently thirsty---cow came along and drank all the spring water. So in return I went over to old bossy and filled the bucket with milk from her!  I often wondered what that old farmer thought when he tried to get some milk from his cow that morning. And many times our animal visitors in camp were bears and other wild animals.

In 1924, or thereabouts, my husband taught at Ferguson Flats again and we lived then on the old Peacock place where Morgan Darling lives now. The old log house that was our home that year, is still standing there although not in use. We had three children at that time.

In 1926 we moved to Lessard where my husband took a homestead. I stayed there until our family of three boys and two girls were grown. In 1953 I spent three years running a booth at Crane Lake. In '56 I went north to Grist Lake and  ran a fishing camp for nine years. During the winter months it was a very isolated life and sometimes I wouldn't see another soul for three months at a time. But there were lots of my wildlife friends, such as deer and moose. In 1965 I came back to Lessard and spent two years with my son-in-law and his family.My daughter, Ethel, had passed away and he was left with five children, some of them quite young.

Next I spent a year in Bonnyville and then came back to Lindbergh to live in the old home place.  Now I am living in Elk Point and enjoying reasonably good health. Sometimes I think back to the days when I was a youngster and the doctors recommended that my parents move to  a colder climate because of my poor health. Apparently, it was a wise move when they came to  Canada, as I have sure had a full and rewarding life here. I have three sons and one daughter living. Merl at Watson Lake Yukon; Robert at Conklin; Margaret at Leduc and Clarence at Grand Forks, B.C. There are now 16 grandchildren and 3 great grandchildren. 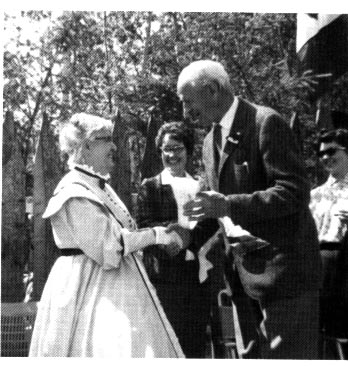