I came west from the Kitchener-Waterbo area in Ontario in 1932, stopping first in Saskatchewan and later that year coming to Mannville where a cousin of mine lived. I stayed with him for a while and later with the Lorenson family, working wherever and whenever possible. Jobs were scarce then and during the winters of 1933 and 1934 I worked for $5 per month, hauling wood, straw, hay, milking cows and doing all the chores. 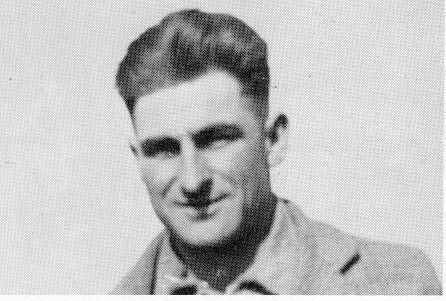 In the spring of 1935 I was wanting to own land of my own. I came to north of Lindbergh and there I purchased a half section from the Soldiers' Settlement Board for $450 cash. (N.E. and S.E. 10-57-5-4)1 stayed with Fred Lorenson for a year until I built myself a log shack with a sod roof and dirt floor. In later years I added improvements to this building and it remained my home all the years on the farm. I worked with Fred, sharing machinery until we eventually got our own. In 1951 I bought the Bud Long land. I rented three quarters of school land and when it came up for sale, I bought it. In 1959 I bought the Rex Hatchard land.

Dan and Major - Nels faithful team with a load of wood.

I had brought a few cattle with me from Myrnam and acquired more by trading and buying until I developed a milk herd. From 1941 to 1943 I milked eight cows by hand and shipped cream. However the work involved too much time spent washing pails, separator, etc. and away from other farming so I decided to go to beef cattle instead. I had various hired men from time to time to give me a hand. 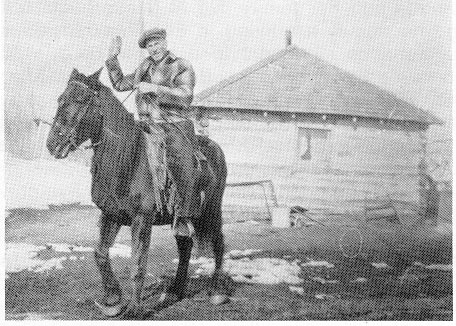 Ronald Baker at one time he worked for Nels Goettling

I farmed with horses until the mid forties and bought my first tractor then. I had a little team which I shall always remember as my most faithful slaves. They served me for the entire 27 years I farmed and I often wonder if I could have managed without them. I bought my first car in 1941 while I was visiting my family back home. I kept it for two years and then traded  it to Smiths for some land breaking. I sold the farm in 1962 to Ockerman Brothers. I had an Auction Sale the following year to dispose of my machinery. From then on I worked on different jobs - mostly in construction - and moved to Beauvallon where I have spent the last seven years. Here I have done market gardening and also did many odd jobs for many people in the area.During the years I have devoted my free time to active participation in missionary work of the, Seventh Day Adventist Church.

Ill health has now forced me into retirement.