Working to pay for the Homestead

With the then low cost of living, low taxation, wild fruit, numerous wild fowl, big game and fish, those who had sufficient money to purchase livestock and farm machinery, or had brought these necessities with them, could secure a living by growing a large garden, and if they could accumulate sufficient feed for their livestock during the long winters. Progress was slow due to a noticeable lack of currency. This was probably one of the understatements of that era, as money was in short supply for the majority of the settlers.

Work was to be had on railroad construction, such as, clearing railroad right-of-way, building railway grades, station work in swampland, etc., hewing of railroad ties, railroad culvert materials and bridge timbers, most of which was done by manual labor in the woods and usually a winter works program. One problem was travelling to these jobs. Wages for common laborers working for sawmill operators a minimum of ten hours per day, were as low as $20.00 per month, including board and lodging. The employees supplied their own bedding plus transportation to and from the logging and lumber camps. Sometimes it meant walking a considerable distance, carrying a pack.

There were but few jobs for wages within the district and although there was an oversupply of necessary initial work to be done, it was usually done between neighbors in a co-operative way and little or no money changed hands. Some settlers spent winters away from their homesteads working  at railroad tie camps, sawmills, or fishing at some of the larger lakes. Others freighted fish and lumber to the nearest railroad towns using horses and sleighs; and, if they were not rushed on their return trip, they would freight a sleigh box load of merchandise for one or more country stores along the way. 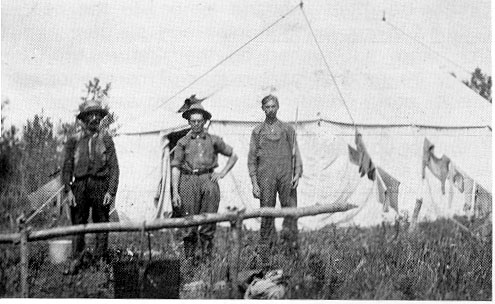 1912 - Settlers often had to go to railroad camps or any job available away from home to earn some money.

Teams of horses used for this work had to be good as well as very well fed and cared for. Teamsters had to know more than just how to sit on their freight loads and hold the lines in their mitted hands.

The long trails travelled in cold weather were difficult for men and beasts. A snow plow was unknown then, and snow drifts or fallen trees across trails had to be removed by other means. Most freighters carried an axe, shovel, logging chain, an extra whippletree, feed for the horses, lunch for themselves, and other necessary articles in case of emergency. The settlers who had to sell their labor at what they were offered from spring through part of the fall, and then spend a minimum of six months on their homestead to establish residence in accordance with the regulations of the Dominion Land Act, found the situation a bit more difficult. 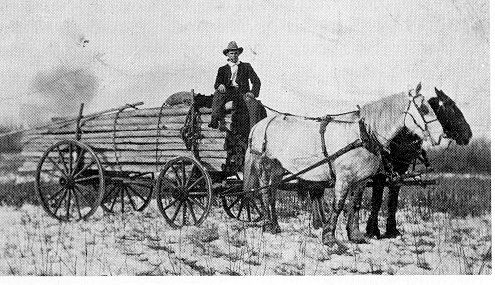