All organizations begin with a group of people uniting to promote or accomplish a goal to benefit them all. The Ferguson Flats Association began as just such an enterprise. In 1949 after the new school was constructed, much remained to be done. The yard was in a deplorable condition resembling a newly plowed field. As a playground, it left much to be desired. It became apparent that any improvement had to come from local effort. One evening that fall many of the parents and the local school board met to see what could be done. The community had been promised by the Divisional School Board that ownership of the old school would be granted to them in return for some work. They would be required to obtain a title to it. They decided to form a club and on November 3,1949 22 members paid a 25 cent membership fee and formed the Ferguson Flats Club. Officers elected at that time were:

After doing as much as was possible they held more meetings, and sent a delegation to St. Paul. As a result they were reimbursed for some of their work and informed that no legal transactions were possible unless an organization was incorporated with the Registrar of Companies. The club decided to proceed with this recommendation, changed its name to the Ferguson Flats Association, became incorporated and in May, 1950 final plans were carried out in obtaining a title to the old school building. 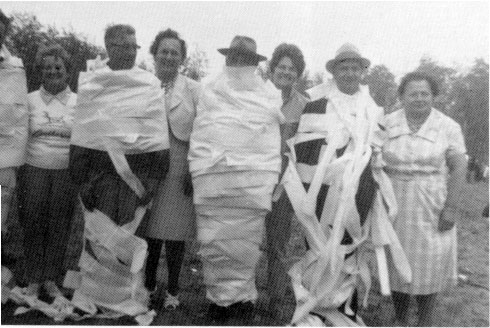 Some "prize winning wraps" in a contest at the picnic

The organization met regularly, and the old school served as a community center. Dances and whist drives were held regularly and records show them as being financially successful as well as en joyable for those who attended. Picnics held annually were a joint community and school event, taking over from the Farmer's Union. The new school yard was chosen for this in preference to the former picnic grounds at the Flats Corner. In 1951 when it was brought to the attention of the community that the local cemetery was not legally owned by them, the Ferguson Flats Association began proceedings and in 1955 a title was obtained making it a property and responsibility of the Ferguson Flats Association.

In 1957 when centralization came to this area, the local school was closed and the new building stood idle. In 1959 the possibilities of purchasing this building were discussed. Some favored the idea, others were more pessimistic about such an extravagant venture. However the majority were willing to go ahead and although the price of $500 seemed too much for the club at this time, an agreement was reached with the School Division as to terms of payment. Canvassing of the area for support rendered the necessary funds for the down payment. In 1961 the building was totally paid for. Remodeling was done by the men who volunteered their time. The center now met the requirements necessary for a licensed hall. All entertainment was held here now and the old school building was used no more. It still stands on the original site on the corner as a reminder of the days gone by. 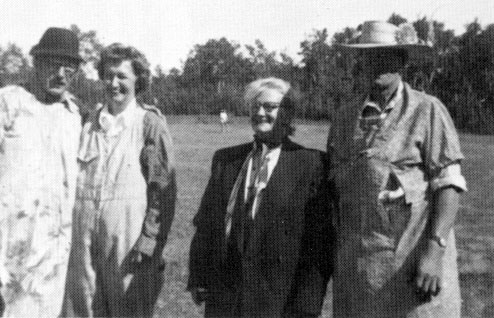 Proud winners of a "Suitcase Race" at an annual community picnic

In 1963 the hall was wired and the convenience of electrical power was most welcome. Those unpredictable old gas lamps were now put away. Various improvements have been made from time to time. In 1973 a Recreational Grant was received which helped in making further improvements to this building.

The Ferguson Flats Association continues on as the recreational club for this area. The center is free for all members to use. Although the competition of sports and entertainment offered in our centralized towns makes it difficult for a rural community to sponsor any activity profitably, there are still many occasions when the center is very much alive. At Christmas, Santa Claus makes his annual visit here at either a community party or a concert put on by the children, complete with an improvised stage and sheets for curtains just as the children did many years ago. Every summer a community picnic is held and many still enjoy this little get together where the children can enjoy the races, contests, and ball games, and the adults can have fun too, and no admission is charged. Many parties have been held and enjoyed by all the hall is also available for meetings, church services, and as a polling center. 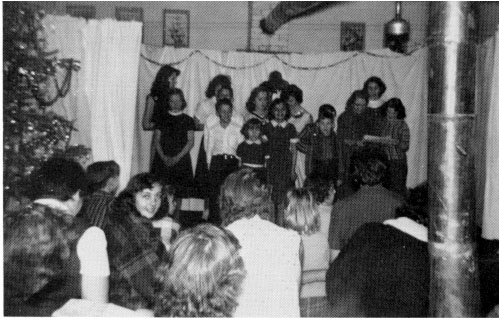 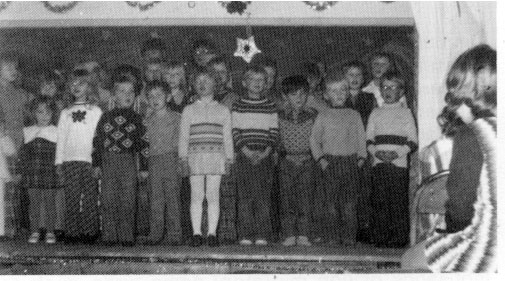 With the passing of time, the rural community depends less and less on its resources for entertainment. Dances, which were once the most popular form of entertainment, are no longer so. Large centers where an expensive orchestra can be brought in provide this facility. Teenagers prefer their own dances with their own type of music. It is no longer feasible to organize sports in a rural community. During the winter, a number of curling enthusiasts, have taken advantage of the curling rink at the Salt Plant. The newly constructed arena in Elk Point has captured the hearts of many young boys who are becoming keen hockey fans. Our large centralized school provide all types of sports in which a large number of our young people participate. Card parties which were once popular are becoming less so each year. Crib tournaments continue to have a number of interested participants. In the summer, rodeos, ball tournaments, and various sports days leave very few free weekends. With the present fast methods of transportation and good roads, everyone travels a considerable distance to go to whatever leisure activity he wishes. The numerous lakes in the area attract people from near and far. Many fishermen still like to come to Gamier Lakes. Others choose to go to Whitney or Laurier. In the fall, many visit our area during berry picking time. Undoubtedly, many recall the s6urce of their fruit as they enjoy it during the winter months. 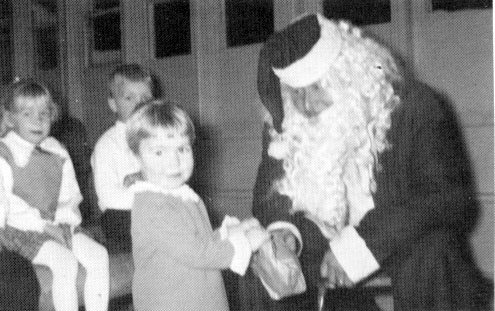 1970 - Santa never forgets to visit the Community Center and pass out the treats to the children.

In recent years more and more people travel away from home to see new places and visit far off friends and relatives. Likewise, many people return to the area to renew acquaintances and see the changes which have developed through the years. Television has also had its effect on social life. People are able to view sports, movies, and various interesting shows in their own homes, thus no longer needing to go out or perhaps just visit, especially during the long cold winter months. Social life as it was known in the early days has disappeared from the rural scene. In spite of the progress and the many changes the Ferguson Flats community will strive to preserve its center and whatever few activities it can and the Ferguson Flats Association will continue as long as there are interested members, who are willing to see that the rural community does not fade away completely.