There were always social gatherings of some sort and everyone seemed to like to participate. Whist drives were held in the homes during the winter. We would have a small charge, to cover cost of the prizes, and everyone would bring something in the line of lunch. If small children were brought, when they tired they would be put to bed. The card-playing would come to a halt while the children were settled down, and no one seemed to mind having to wait. Then there were housewarming parties and they had one at our house too, in the winter of 1935. There were no partitions in our house at that time and I can remember folks sitting all over the place, even on the stairs. Some of the people were from as far away as Beaver Dam, and others from Middle Creek, Spring Park and Lindbergh. Those that had come a long distance arrived in the afternoon and left after breakfast next morning. We all danced and had a real good time. A shower was held at our place for Roy and Mary Gallagher after they surprised us all by getting the 'knot tied'. Each winter we would have house parties at Slim Harris's home. He was a bachelor but had a nice roomy house and many good times were enjoyed there. When Gib and Freda Wickman were married we had a shower and dance for them there. And of course there were many more such parties.

Every Christmas time, as long as we have lived here, there has always been a Christmas concert or party for the children. The children always do so well in their acting and singing. Santa never fails to make his appearance with treats and gifts for all. To raise money we would have box-socials, pie socials and shadow sales. It was always a lot of fun and suspense as the men wouldn't know who they were having lunch with until after they had bought the pie or box and found the name~with it. The ladies spent many hours, days beforehand, decorating their boxes for these socials. Some of them would make quite elaborate looking ones, with the help pf crepe paper and cardboard boxes. I have seen some that were made like a chesterfield or an aeroplane. Many were just covered with crepe paper and decorated with crepe paper flowers. A delicious lunch would be put inside and all was in readiness for the big night.

The community bought the schoolhouse when the children were bussed to Lindbergh. It has really been used for a lot of different community projects. We've had showers, anniversary parties, meetings, funerals, church services and of course elections. It sure has helped to keep the community together. Picnics were held in the summertime and still are.

There are ball games, races for the kiddies and horseshoe games for the men. The picnic is usually held as soon as school is out, before folks start leaving for their summer holidays, and get too busy at the lakes. We are real proud of our community and in the last three years there have been six new homes built. This is a sure indication that the community is prospering. Times have surely changed since we first came here as nearly everyone has a car or truck, or both. So they are all able to get around and see more of our fair country. Many spend their weekends at the lake with their campers and we never dreamed of that in the old horse and buggy days. 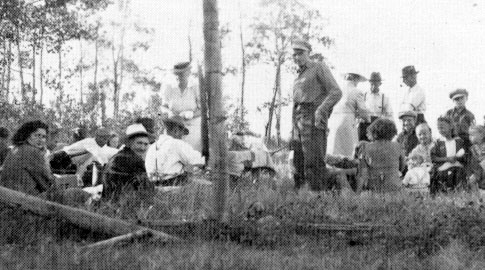 A picnic at the Ferguson Flats corner.