THE LAST BEST WEST: THE HOMESTEADERS

The people who made application for homestead entry were from many walks of life, and many parts of the world, there being no less than sixteen nationalities. They had congregated here where most of them hoped to establish homes. To attempt such a venture, all had one thing in common - a great amount of intestinal fortitude. One homesteader was an engineer who had helped build the Panama Canal; another had been Second Mate on the biggest sailing vessel afloat; and another fellow had travelled from England with the British Navy, rounding most of the world before returning to the United Kingdom; and there were the men who had panned for gold in the Yukon and Alaska before settling here.

To reach this area, most prospective settlers travelled by steamboat and/or by railway at settlers rates. To reach their prospective homestead they travelled by ox carts or horse-drawn wagons. Some railway coaches were heated by a potbellied stove at one end of the car, while several gas lanterns hung from the ceiling above the aisles. The floors were usually of wood, but sometimes there was a strip of carpet down the center of the aisle to walk on. The seats, though upholstered in leather, were hard and straight-backed. Restrooms or washrooms (such as they were) were available, Ladies at one end of the coach and Gents at the other. There was a Smoker section on some of the cars so that cigar and cigarette smoke would not bother the non-smokers. Air conditioning came through an open car door or window. Drinking water was provided at each end of the coach, and a type of built-in paper cup dispenser was provided. However, it was very likely that the cup would collapse while you were drinking and you would acquire a wet lap and not quench your thirst, so it was quite common for folk to carry their own aluminum collapsible drinking cup. 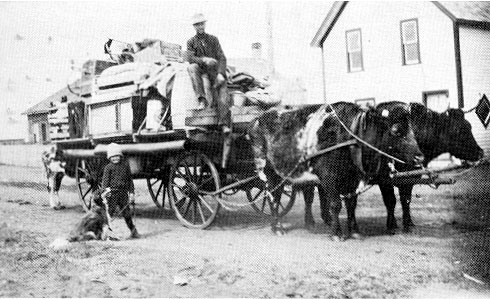 Homesteaders like this one brought all their possessions with them

Everyone either carried their own lunch or didn't eat unless they purchased apples, peanuts or popcorn from the "Newsy". The train did stop at the Divisional Points where you could get off and eat if you so desired. Many people travelled overland in covered wagons pulled by oxen or horses, leading cows behind the wagons, while the chickens and geese were crated and were either inside the wagon along with the family and all their possessions, or were fastened onto the outside of the wagon.

Some folk, when reaching Edmonton, purchased lumber and built a scow which they floated down the Saskatchewan River after loading the scows with their personal possessions and families. They then beached the scows as near as possible to where they planned homesteading, and used the lumber in the scows for part of the construction of their new home.