It would be impossible to write abou tall the settlers who had homesteaded, as someone would inadvertently be omitted. However, the majority of the folks were good neighbors and good citizens, and we had a lot of fun and laughter along with the hard work over the years.

Although everyone worked hard, they also played hard. Quite often one would dance 'til dawn, then go home, do the chores and continue the regular day's work. Some attended the Indian Sun Dances, sometimes remaining for the full three days of the celebration.

People would load their families into wagons and go and visit friends at some distant point - it would be approximately a one hour drive now, but, then it may have taken more than a day's travel - and stay for a few days. This, providing, of course, they had been able to get someone to do their chores during their absence. Often the children and some of the adults slept on the floor, as there were seldom any spare rooms for guests then. Many of the houses that were big enough for a house party or dance, had rough lumber floors. In case a dance was to be held in a house such as this, neighbors would arrive with wood planes and some sort of nail set to sink the nails into the rough lumber deep enough so the blade of their planes would not be dulled, and would smooth the lumber with the plane, making it easier for the dancers, and also making a better floor for the occupants thereafter. Just prior to the house party, likely a surprise party, the furniture was pushed aside, and anyone who could play an instrument - and there were a number of good musicians did so, while everyone danced to good old time toetapping tunes. The ladies would bring cakes and sandwiches and pies, as well as some spoons and cups or other necessary dishes, so that the hostess would have enough to serve the entire crowd.

There were Christmas concerts, with all the school pupils entertaining; Pie and Box Socials, where the men vied for certain fancy boxes of delicious looking and tasty pies. The men who bid the highest secured them. However, there was additional lunch for those who did not purchase any boxes or pies. 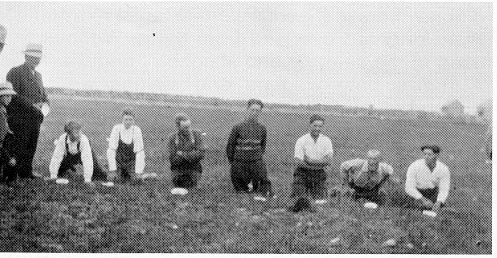 A pie eating contest at one of the early picnics.

The picnics were usually quite large and people travelled to them from miles around. The picnics held at the Ferguson Flats corner, opposite the store and Post Office, were large events, for those days. There were foot races of all kinds, kiddies games and competitions, baseball and softball games, horse races and horseshoe pitching. The prizes were small and inexpensive, but coveted by those who won. The ice cream man or men were kept busy turning the handles of the ice cream freezers to supply the gallons of free ice cream required. (Ice was cut at the lakes during the winter and stored in sawdust filled ice houses for summer use. The cream was donated. And, coffee and tea were made by the wash boiler full.

Ice was cut at the lakes during the winter and hauled home to be used during the summer as there was no other refridgeration then.

Home-brew was sometimes made somewhere within the district, and often consumed by those who liked it.

Church meetings of various denominations were held in homes and school houses due to the absence of church buildings.

Many of the original homesteaders have moved away, or have gone on to another, and hopefully, a better life. The "good old days" all left their mark one way or another on all of us. Furrowed brows and white hair from worry and sickness, or crippled limbs from accidents. The younger generation (the ones who have remained in the area) are continuing on the farms and land that was covered by timber in the early years. Their life will not be easy either, but we trust that our honest efforts during the early days will be appreciated, and prove not to be entirely in vain.

The methods of farming are modern now, and the farms are larger. Modern equipment can accomplish in a very short time what it took the homesteaders months and sometimes years to accomplish. The cost of purchase and operation of this equipment that is being manufactured for agricultural purposes is almost prohibitive.

All that remains of what was once, "Home Sweet Home".

The majority of the original buildings are long gone, some were torn down, some just collapsed due to the passing of time and lack of use, while others were bulldozed down. The homes that once held the laughter and tears, and hopes and dreams of entire families are no more. The little flower gardens that struggled so valiantly for so many years have either disappeared entirely, or are overgrown, along with the building sites  with fireweed or thistle or other weeds, and in some places trees; while on other home sites the entire area is under cultivation.

But, such is progress.

There have been many changes over the years, and one wonders what the future will bring.

My best to all.