On March 5, 1947 our ladies' club was formed; We called it the Ferguson Flats Farmerettes. There were six ladies present, Lilly Ockerman, Mary Stewart, Hazel and Hilda Nelson Leatha Ockerman, and Olive Nelson. The real purpose of our first meetings was to provide an opportunity for the members to learn to knit. 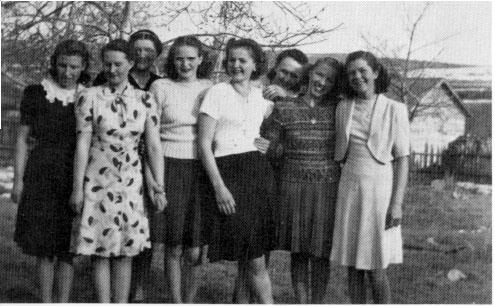 We held our meetings in our homes with the first one at Olive Nelson's. At first our meetings were held every week, and later changed to one a month. It was later decided that any lady in the district was welcome to join our club. We began to hold parties with the first - a popcorn party - being at Gwen Nelson's. During the winter we had free whist drives at various homes in the district. Later on we had them in the school. Our first bridal shower was for Mary Stewart, our first club secretary, on April 16,1948 who left our district after her wedding in May. 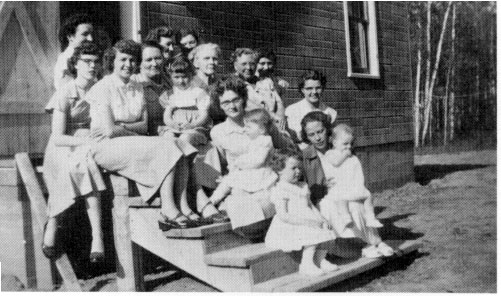 Soon after the forming of our club we had our first bazaar at which we raffled our first made quilt, a Butterfly design, and sold hand knitting and home sewing. We also had a bake auction. We continued to have a yearly bazaar for a number of years. Each year we made a special quilt which was raffled. We made the Sunbonnet, the Necktie, the Pansy, and three Crazy quilts, and several years later we made a Centennial Quilt. At one of our bazaars we served potato salad, baked beans, buns, pickles, and cookies for lunch, FREE! For years an added attraction was homemade candy and popcorn which we sold at 5 cents for a large bag. The proceeds were used for buying cups, lamps, card-tables, cup-boards, etc. for the Community Hall, plus a large number of other items for other community activities. Donations of cash, an easy chair, and radio were also made to the Elk Point Hospital. We have donated to many charitable funds over the years and continue to purchase many needed items for our Community Center.

Our Club has been responsible for hoIding bridaI showers, anniversary, farewell, housewarming and welcoming parties. We also honor our Senior Citizen residents, who reach their eightieth birthday with a small gift. Our Ladies' Club continues being an active organization within our community. Instead of bazaars, we now conduct a raffle and bingo each fall to supplement our funds. Our meetings are held once a month, except during the summer, with each member taking her turn as hostess. Our major project the past while has been the compiling of this history book of this area. 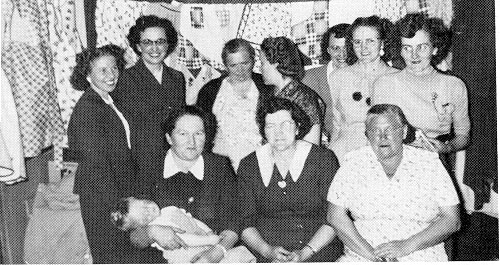 1953 Ladies' Club at the Annual Bazaar

Our members over the years have been: