I started teaching in October 1948 after the fall farm work was nearly completed. Hilda, Edward's sister, looked after Charles (three years) and Ellen (one and a half years) for me. I went to school in the truck when Edward wasn't using it, or horseback. In the cold winter days when the roads were blocked I would go by team and cutter. We were still using the old schoolhouse although a new one was being planned. However, the plans for a new one did little to help keep us warm on those cold mornings. We did have good times and everyone took part in the games at recess and noon. I quit the end of June to look after my home and family. 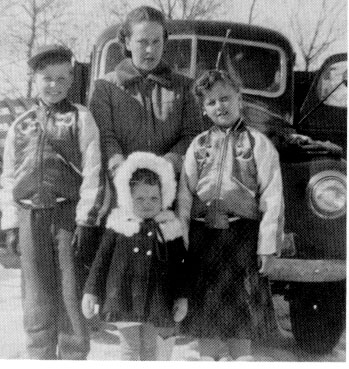 Then in January 1957 Mr. Paul Buck, our school trustee, asked me if I would teach the remainder of the term. I told him I had a three year old at home to look after. He said "Bring her along, no one will object". So Amy Ann and myself started going to school every morning. We were accompanied by Charles, now in grade seven and Ellen who was in grade four. The pupils all accepted Amy Ann and made a pet of her. That June was the end of schooling in the Fern Chapel schoolhouse In September the pupils were bussed to Lindbergh and Elk Point.