We were introduced to the Ferguson Flats area in July 1946 when, after brief visitation in the homes, we held our first summer Bible School. Come fall, we received permission to hold a Bible Class in the school each week. It was encouraging to have all the children as well as the teacher Mrs. Roy Hat-chard at that time and later Olga Mikietuk (Mrs. Carl Ockerman) take these in. For some years Sunday afternoons found us at the school holding Bible Classes for young and old alike. How we appreciated the help of the Albert Hammond's in having the building warm during the winter for us. Not the extremities only, but our whole frames were well chilled by the time we'd travelled from Spring Park. 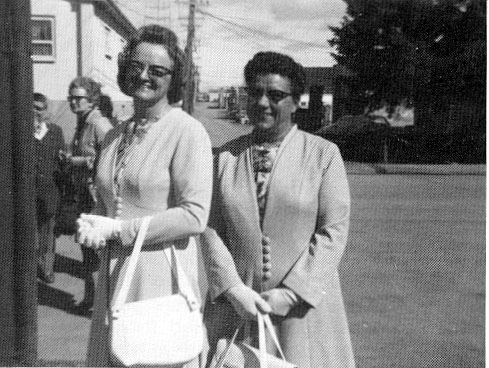 Our mode of transportation was not quite as obsolete then as it was in 1955 when we finally abandoned it. A horse and buggy or cutter served us well. Old Nigger was a faithful though slow nag. He was turning grey when finally pensioned off to become a children's school pony and was the envy of the aging populace when restored to jet black in color. We were later graduated to a faster, lighter team that increased our speed all the way to 6 m.p.h. and a democrat that served not only as our transportation but also as delivery cart. We hauled vegetables, furniture, gobblers or anything else the friends of the Flats or neighboring districts needed transported to areas where we were heading.

Travelling actually was one of our major projects since we were teaching and visiting in five other surrounding school districts. Therefore weather had great bearing on our ability to get around. One memorable trip took place during the winter of about 1951-52. There had been near record amounts of snow and a recent howling blizzard. En route from Spring Park to Ferguson Flats we missed the turnoff from the road into a field through which a trail was cut. Our cutter rode high on the drifts, but poor May and Queen were plunging belly-deep in them. Too late we realized what we had done and it was hopeless to get the team to turn without straddling the tongueor some such awkward act. Nothing was left to do but unhook, spin the cutter on top of the drift, hook up and retrace our tracks to the detour. Needless to say we missed our Bible Class at 3 P.M. but we could at least get advice as to what road would be best to return home on. 'Home' at that time was the old 'Gibson Place', three miles N.E. of Lindbergh.

We were assured that the road east and south past Hillebrands would be clearest. By 5 P.M. we had encouraged our team to plough through to within half a mile of Emery Bartholomew's but at that point the snow was deepening on the road. We were cold and it was almost dark. One of us got out, loosened the fence wire and stood on it while the team crossed to the field, and we could proceed toward Emery's house. There was brush, no trail and no clue as to the route to his house. A tree served as a hitching post and it was now our turn to plunge above our knees in snow to go to the house for instructions. We were met by a surprised, somewhat embarrassed but non4he-less obliging bachelor who escorted the team on what used to be a trail, and we were again on our way. We thanked the Lord for His hand in it all. It would have been tragedy apart from Him. 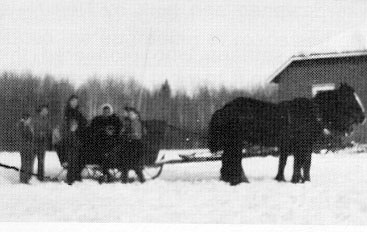 Of course, there were also the beautiful trips where we in our 'Oatsmobile' could enjoy far more of the scenery and wildlife than anyone buzzing along in their modern vehicles. We would dare say there were fewFwho saw fireflies glinting in the darkness. Those headlights would easily dim their delicate beams to naught. We saw them many times and revelled in it. 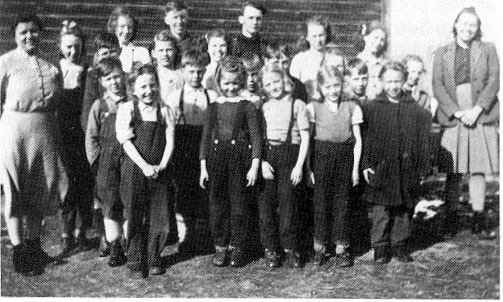 Our visitation in the district, aimed at getting acquainted with the people and ultimately acquainting them with the word of God and the Lord Himself, was always a pleasure. There was no premium

Qn hospitality in Ferguson Flats. Whenever we were invited in the door the tea kettle was usually on and should we be invited to a meal, our team was seldom forgotten. They received their share of attention and provision. Seldom were we storm stayed, although the Edward Nelson's could tell of one such occasion when they graciously housed us for two nights during a blizzard.

There is one event in our ministry to this area that we will not soon forget. That was the funeral of Mr. Joe Martin in the winter of    . Without the aid of mortician or funeral chapel he was laid to rest with all love and respect due. an aged citizen. Neighbors and friends gathered on that bitterly cold day in the old schoolhouse to pay their last respects and hear the word of God. The slow trip, all with teams and cutters or sleigh boxes, for two miles to the Ferguson Flats cemetery was no pleasure trip for more reasons than one. We were glad to warm up in a heated caboose that had travelled with us, before the graveside ceremony. It was a far cry from today's all-too-often stereotype or even rushed burial service.

We were notified by our mission (Canadian Sunday School Mission) in the spring of 1954 that we would be moving south. It was with regrets we left Ferguson Flats and all the other districts, the schools and the families we had come to know, to say nothing of the individuals who had endeared themselves to us.