The settlers who first came here either walked or went by oxen the ten miles from here to Frog Lake for groceries and mail until the Ferguson family moved into the district west of here and set up a supply store and a post office which was called Ferguson Flats. This was much closer and certainly more convenient. Ferguson Flats remained their post office until 1929 when Wm. Saranchuk got the post office here and the district was named Primrose. Twice a week, Tuesday and Saturday, the mail carrier brought the mail, regardless of weather or roads, (and these were often indescribable), travelling with horses and later by car. Those who faithfully served as mail carriers were: Mr. M. Dobson, Vic Ramsbottom, Bud Long, George Smith, Charlie Martin, and Dave Thomson.

On these mail days, the Saranchuk hpme became "Open House" as everyone came to await the arrival of the mail. Events of the week and all local news were sure to be discussed. In 1951, when Saranchuks gave up the post office, Dave Thomson took over. As he brought the mail out from Lindbergh, he established a new service for the people by leaving their mail in their boxes along his route. He continued until about 1965, when the Primrose post office was officially closed and Lindbergh was now the post office for this area. 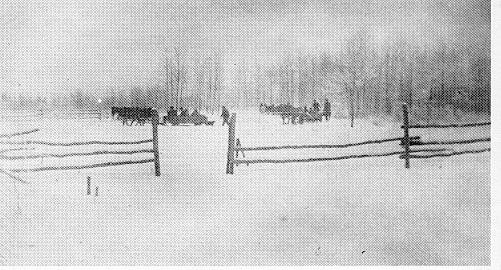 Sleigh loads of Indians passed through the district when travelling between reserves.

The main road through Primrose followed the early Indian trails which connected Frog Lake with Kehiwin Reserve. For many years whenever there was a special occasion such as a Sun Dance or at Treaty time there would be an endless number of wagon loads of Indians passing through, camping along the roads, and often stopping at the homes to buy eggs, cream, bread, or any produce or perhaps to trade for some beaded article. In the winter they would often stop to warm up. They were always friendly and were welcome.

Before the railway came to the area, the homesteaders hauled their grain with oxen and later with horses, some sixty miles to market. These were long tiring trips and took several days. When the railway arrived in Elk Point and later to Lindbergh, this was a great improvement. Lindbergh was a thriving little center with several businesses and all their marketing was done here.