THE LAST BEST WEST: THE SURVEY

At the outset of surveying in Township 57-Range 5, West of the 4th meridian which commenced in 1903 and continued intermittently until 1922, the timber and brush had to be cleared in many places for a path from eight to twelve feet wide, depending upon the density of the trees, etc., to avoid interference with the surveyors instruments. Locally, all survey lines through timber or bush were called Cut Lines. Prior to the arrival of the settlers, the land had been surveyed into Townships of 36 sections of 640 acres each. Each Section forming one square mile. Section 11 and 29 were known as School Land, and an occasional Section of Hudson's Bay Land, plus some Half-Sections that could be purchased for cash that were known locally as South African Scrip. The latter pertained to Dominion Government arrangement with Veterans of the South African War.

The Sections were numbered with  Roman Numerals on round iron stakes 1 inch in diameter and approximately 3 feet long with 6 inches of their tops squared for topographical numbering of the Sections. The bottoms of these stakes were pointed and they were, when properly numbered, driven into the ground at the North East corner of each Section. Apparently the markings were made at that time with sharp chisels for marking iron, and Roman Numerals were used because of the predominance of straight lines.

At every alternate mile, that is, every other Section, there was a Section survey line east to west and vice versa, every two miles, and four rods - one surveyors chain length - was reserved on the north side of the alternate Sections for the width of the allowances for a road. When the south to north four rod width road allowances intersected it was the nucleus of crossroads. At half mile intervals, both from south to north and from east to west on the Section lines, the surveyors dug four holes about ten feet apart and two feet square to a depth of about sixteen inches, and a dirt mound was made at the perimeter; and at the exact topographical location of the Quarter Section corners a wooden stake was driven into the ground near the mound of dirt with the numeral 1/4 cut into the stake near the top. 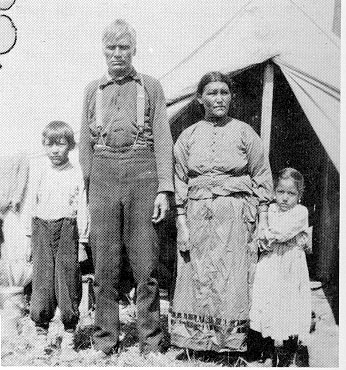 The road allowances were extra, and each homestead contained 160 acres, providing there was not a slight error in the survey lines, lakes, rivers, or other natural obstructions. Surveying was a job that demanded exactness as near as was humanly possible. In addition, most of it was hard and often difficult physical labor. This, together with inclement weather, innumerable flies, and mosquitoes at certain seasons made the workers living conditions almost unbearable.

Land surveying was done within this area when there was little or no frost in the ground. In case there was a lake, river, or other natural obstruction to prevent a Section stake being driven at the NE corner of a Section, the stake was driven as near the obstruction as possible, and the distance to the proper topographical location was stated on the survey stake. As any compass pointed about 18 degrees east of north, of necessity, the south to north survey lines were corrected at about every 24 mile interval by moving them westward the necessary distance for complete adjustment and the south to north survey lines again continued veering slightly north eastward from the correction until the next correctional adjustment was made and so on. These were known as Correctional Lines and were usually on Township Lines.

Settlers homesteading prior  to 1905 were entitled to all mineral rights on and under their land. From 1905 onward, all mineral rights were reserved for the Crown so that from that date about all the settler homesteaded was the top soil, plus vegetation grown thereon. Almost all the settlers homesteaded within the area after 1905, therefore, were not eligible for remuneration for minerals that were taken from their land.

Some prospective settlers lived in tents, makeshift shelters, covered wagons or dugouts on the side of a hill while attempting to locate a homestead and make it habitable. It is virtually impossible to visualize the effort that was necessary for the first settlers to select what appeared to be a suitable homestead, locate the Section number by reading the Roman Numerals on the survey stake, then ascertain the Quarter Section that had been chosen. Many made a second and third choice in case someone had been ahead of them and had made Application for Homestead Entry on the first or even second choice. Then they had to travel to a Sub-Lands Agency or to the Dominion Lands Office in Edmonton to make Application for Homestead Entry. If of foreign birth or nationality, they had to apply for Canadian citizenship. They would then return to the land they had selected and commenced their homestead duties which consisted of constructing a habitable house, preparing 30 acres of land for cultivation, fencing 160 acres, and constructing outbuildings for the livestock. This all entailed a considerable amount of hard work and long working hours. 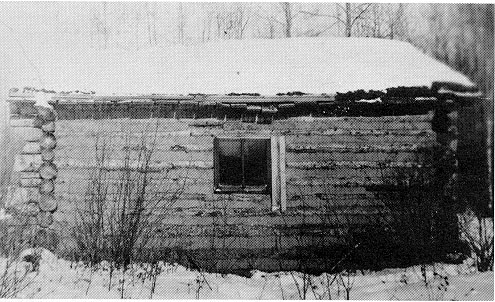 One of the first houses built by an early homesteader 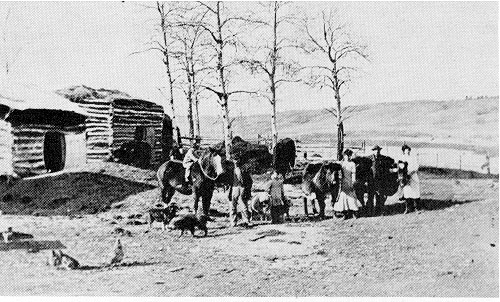 Outbuildings for livestock had to be constructed

One settler erred in having the correct Range west of the Fourth Meridian when reading the topographical description of the land selected and later learned that he had homesteaded six miles west from where he had intended to make his home. This settler kept the mistaken land and did his homestead duties there.