Early in the twentieth century the Immigration Department of the Canadian Government launched an advertising campaign within Canada and some foreign countries for settlers.The campaign was especially focussed on the area that is now the Provinces of Manitoba, Saskatchewan and Alberta. To add to the persuasiveness of the advertising, the euphemism "The Last Best West" was the caption adopted. Really, this was not a misnomer, because, as a whole, the area contained an apparent potential for almost all the necessities of life. To achieve this potential, the land homesteaded first had to be developed by the settlers in order that a greater variety of the necessities of life could be produced for the general betterment of all the settlers. 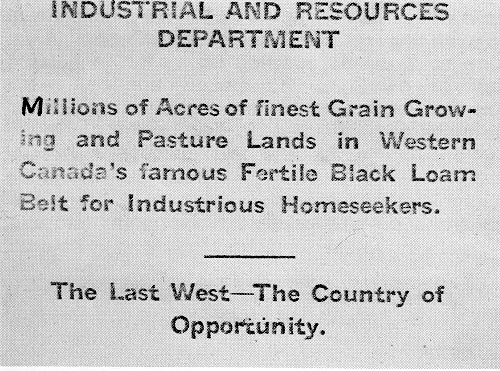 The area that is being considered for this article covers the approximate distance between St. Paul eastward towards the Saskatchewan border, and north from the Saskatchewan River. The first inhabitants of this area were Indians. The first trails, roads, fords, bridges and corduroys were constructed by them. Some of them are still in use today.