During the summer of 1939 a hail storm destroyed the crops in the Heinsburg area where we lived. So when Fred Lorenson, who was the secretary of the Fern Chapel school board at that time, asked Dad to teach their school, he accepted. Arrangements were made to live in the 'Blue House', a vacant house just east of the school. Here Dad, Billy, who was nine, and myself lived during the week but tried to get home on weekends. Mum and Bob were looking after things on the farm.

There was a very small enrollment to begin the year. The students were Lilly, Arnold and Johnnie Ockerman, Hazel, Hilda and Neils Nelson, Bert McConnel, Jackie Simpson and my brother Billy. Irene Nelson was taking grade ten by correspondence that year and I was taking grade eleven the same way. We would study at the school if we needed library references and sometimes together in the 'Blue House'. Later in the term, Raymond Hammond started school. 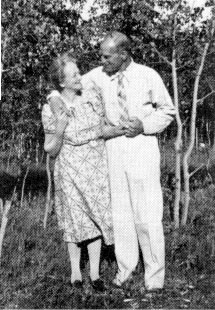 Dad did the janitor work and he used the janitor wages for a Christmas fund for the children. I can remember a pie social to raise money for Christmas treats too. Then there was always the concert to look forward to. What a time we had getting characters for the plays, with such a small group to choose from. Sometimes the girls had to dress up as boys but we all had a good time practising for our parts. Everyone seemed to enjoy the concert and the little school house was packed with parents and people from surrounding districts too. The next year I went away to school, but there were a few more pupils. Joyce French, Dorothy Allen and Eddie Hillebrand started that term.

Dad just taught two years at Fern Chapel then decided he was going to farm again. He farmed until Mum died in 1954. Then he started teaching again and did until he retired in Victoria when he was over seventy years of age. He resided there until the time of his death in the fall of 1973.