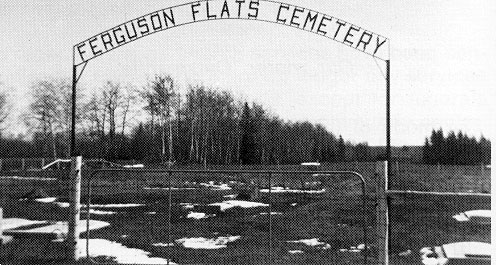 In the corner of the N.W. 27-574 is an acre of land set aside as the community cemetery. It was donated by the late Mr. J. Martin in 1918 when his young son, Lewis, passed away as a result of the flu epidemic. At this time there was no cemetery near. This first funeral was held quietly with few in attendance as many were ill at the time and others feared this dreaded illness. Lacking a minister, Mr. B.B. French conducted the service. From this day on, this piece of land served the needs of the community. Mr. Martin was responsible for keeping the burial records for many years and later Mr. J. Ockerman took this over.

In 1951 the Dept. of Health requested that the cemetery be registered and the land be legally owned by the district. Proceedings were carried on and in 1955 the title to this land was transferred to the Ferguson Flats Association by the new land owner, Mrs. Edna Darling. The cemetery was then legally registered. This cemetery is free to use for anyone in the area. In 1967 a memorial fund was set up. This is to be used to pay for any maintenance it will require through the years. Most of the work is done voluntarily. Mr. French and Dan Allen have contributed much of their time during the summers in keeping it neat and the grass mowed. The sign over the gate was designed and built by Neil Nelson.

Many of our settlers, who pioneered this area, helped to develop it to what it is today, have been laid to rest in this cemetery. May eternal rest and peace be their final reward for all their efforts.