It was during one of the early organizational meetings proposed school district had to be  decided upon. Dan Groves, one of the settlers, suggested the name Fern Chapel, which was the name of his school district back in Oklahoma, and all those present were in favor of this. Consequently, the school district was named Fern Chapel and remained so for many years, until the large School Divisions were organized and the name was changed to Ferguson Flats to coincide with the district name. The east boundary was changed in 1921 when the Middle Creek School District was formed. 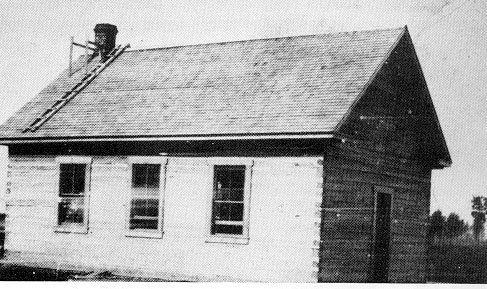 Fern Chapel School just after the chimney had been completed.

The school house was built in 1913 on the N.E. corner of 22-57-5. The building was made of logs. Rocks were hauled for a foundation. The homesteaders donated labour, materials and some money. They got a government loan to hire Mr. John McCuen to superintend the construction of the building. He was paid $1.50 per day, ten or more hours a day. We have been told he donated a lot of work without any pay. The bricks for the chimney were hauled from Vermilion. The siding was put on a few years later. This building was used until 1949 when a new school was built. 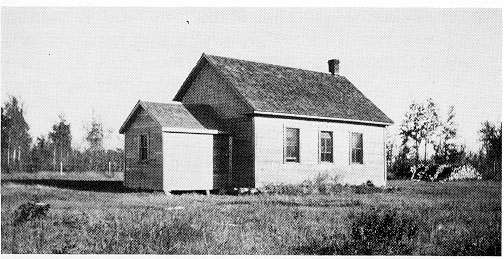 Fern Chapel School after the siding had been put on and a porch added.

Sometimes the school was only open during the summer months, back in the early days. The teachers were quite often University students out during their summer holidays. Some were local teachers who lived at home and came to school on horseback, or a horse drawn vehicle. A number of the teachers were boarded at homes in the district. Mrs. Bob Taylor, Mrs. John Salmon and Mrs. John Ockerman all had teachers boarding at their homes, at different times. Others lived in houses near the school or in later years in the teacherage.