As settlers arrived into the area, and began to take up homesteads, they immediately needed a means of communicating with the outside world. Tyrol was already an established post office and anyone within walking distance of this point, began to use it as his postal address. Mail was brought here from Kitscoty, and the early settlers walked to pick it up. They took turns, picking up any letters to be mailed on their way there, and distributing whatever mail was received along the route on their way back. It did not matter if anyone was at home, the doors then were never locked so a weary or a cold traveller would always be welcome to go in and warm up or rest if necessary. 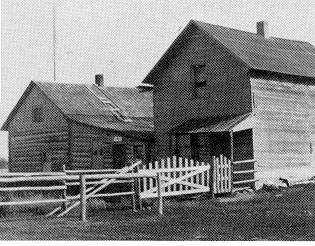 The WR Ferguson residence which accomodates the General Store  and the original Ferguson Flats Post Office.

When Mr. W.R. Ferguson came to this area, he saw a need for a store, so in 1911 he established a small one, on the N.W. 1/4 of Section 35, T.57, R.5, West of the 4th M. A short time later, a two-storey building, slightly larger, was built, and both buildings were utilized, resulting in approximately 1200 square feet of floor space. The upstairs of the new building was then used as a warehouse.

Later in the winter of 1912, a post office was established at Ferguson's General Store. Bearing the name of the Postmaster and description of land location, the post office was named Ferguson Flats, and consequently the community became known as FERGUSON FLATS.

The General Store had two counters, with an aisle between them and the wall shelves. Groceries were kept on the shelves and under the counter at one end, and clothing at the other end of the same side. Hardware was kept on the other side. Parts of the counter space were usually heaped with an assortment of dry goods and hardware.

Goods for the store were purchased wholesale in Edmonton, shipped by railroad to Kitscoty, and then freighted overland to Ferguson Flats. One or two years later, as river crossings and road conditions improved, goods were shipped to Vermilion, then freighted overland from there. Wagons were used in the summer and sleighs during the winter. At times both wagons and sleighs were used during the winter due to the lack of snow in some places. All conveyances for overland freighting were powered by horses or ox teams. For many years, the Ferguson Flats General Store had a large business turnover.

At the outset, the first and nearest Saskatchewan River crossing was at Lea Park. Later ferries were installed at Tyrol and Elk Point. The railroad terminal was, for a number of years, Kitscoty, and the Royal Mail was delivered by way of Lea Park, to Tyrol, (the name was later changed to Mooswa) and then carried to Ferguson Flats.

Lea Park and Mooswa were both rated as Distributing Post Offices; that is, the mail had to be sorted and bagged here to be delivered to other country Post Offices further afield.

It was twice per week mail service from the Kitscoty terminal to its destination. One of the mail carriers named his horses, Tuesday and Friday, to coincide with mail days.

The roads were often almost impassable, especially during winters, and the mail would sometimes arrive a part of a day or a full day late in Ferguson Flats. The snow drifts were there in winter, and there were no snow plows then. Sometimes during the spring thaws, the makeshift bridges over creeks were under water and part of the bridge approach would be washed away, so the Royal Mail then had to be delivered by the Mail Carrier on a saddle horse and a pack horse. The Ferguson Flats postmaster was responsible for bringing the mail from Tyrol to Ferguson Flats.

At one time the Ferguson Flats Post Office had at least 128 patrons, of which 50 were bachelors. Within the same area at present, there are possibly 50 people who would be classed as adult post office patrons. This post office served the area for a nine mile radius. The hitch racks in front of the store had room for at least 20 teams. There had been seen 17 teams and 4 saddle ponies tied to the tamarac hitching rail at one time.

Children were often sent to fetch the mail and sometimes letters were lost while gates were being opened. One spring, a homesteader found 9 letters and took it upon himself to deliver them. 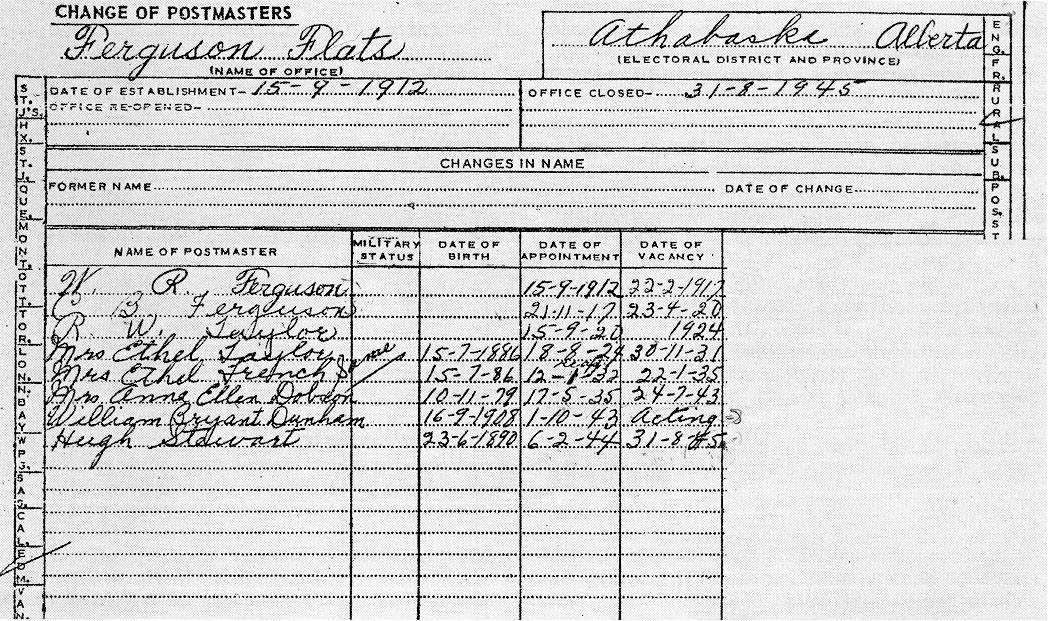 When W.R. Ferguson began operation of the Post Office, he received approximately $29 per year for space rented for postal use. This small sum would not even cover the cost of coffee and meals served to patrons. At this time, however, letters could be posted for a mere 3 cents and post cards required only a penny stamp. Postal notes rather than money orders were handled at the country post offices. In those early days, people came at whatever time of day or day of the week that was convenient for them to pick up their mail and groceries. 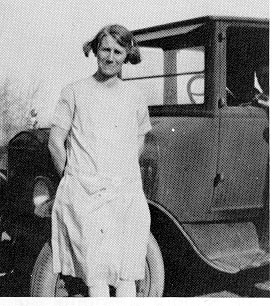 When Mrs. Dobson took over the mail, the Post Office was then located on their land site somewhat northeast of the original Post Office. She also operated a grocery store there. These stores, incidently, were also appreciated by the lndians who frequently stopped to trade as they travelled across country from Frog Lake to Kehewin. Hugh Stewart later operated from this same location.

In 1927 when the railroad was completed to Elk Point, that town became the Distribution Center. One year later the railroad came through Mooswa to Heinsburg. The distribution center then became Mooswa or Lindbergh as it was then called. At this time a new post office was opened at Primrose to serve the people to the east, thus reducing the size of the Ferguson Flats Postal area. Some patrons began to pick up their mail at Lindbergh. 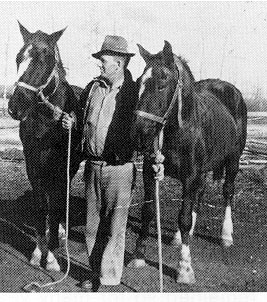 Tenders were issued by the Postmaster General for mail carriers or Mail Contractors as they were rightfully called. These carriers had to be responsible adults, be bonded, under contract for a period not exceeding four years. Their route of 32 miles, began at Lindbergh, via Spring Park, Ferguson Flats, Primrose, and back to Lindbergh. This trip was made twice weekly, by horse and later by car. Carriers through the years included: Taylors; B. French; M. Dobson; Charlie Martin; George Smith; Vic Ramsbottom.

After the Ferguson Flats Post Office was permanently closed, August 31/45 the mail was picked up at Lindbergh. In 1936, Mr. Hardy Lawrence became postmaster there and remained until his retirement in 1950. The post office was then taken over by his daughter, Mrs. Phyllis V. Saranchuk. In1974, when Mrs. Saranchuk retired, Mrs. Betty Butner became the new Postmistress. Although most people from the surrounding areas still get their mail here, there are also some who get their mail in Elk Point. In recent years the mail delivery to the Post Offices has been by truck.

Although we still are very dependent on our postal services, other means of communication in these modern times supplement our need. T.V., radio, telephones, etc. are all faster in keeping us informed and up-to-date on news. Our mail service is no longer hindered by weather, and roads, but rather by our modern day problems of high cost, strikes of postal workers, and strike bound transportation services.