During the early days, what this area lacked in development, it possessed in abundance its ability to provide a habitat for all types of wildlife. The generations of Indians who had passed on before the arrival of the white settlers could have described the numerous animals, including the Beaver, that were abundant here when the migratory Buffalo and Antelope made their annual call. The many abandoned Beaver dams indicated that there had been, probably, thousands of them trapped prior to the arrival of the homesteaders. Non migratory wild game animals, such as Moose, Elk, Deer, a few Caribou, and Black and Brown Bear, numbered in the hundreds. Fur bearing animals, such as, Coyote, Fox, Lynx, Weasel, Ermine, together with a few Martin, Wolf, Wolverine, Otter, Badger, and two kinds of squirrel, numbered in the thousands. There were also thousands of Snowshoe Rabbits. The lakes, creeks and rivers teemed with fish of many kinds.

Beaver and pelts obtained in the area 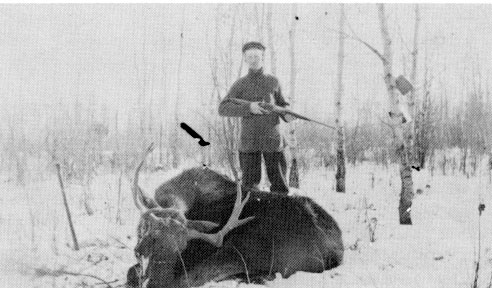 Slim Harris and his first moos he shot in this area. 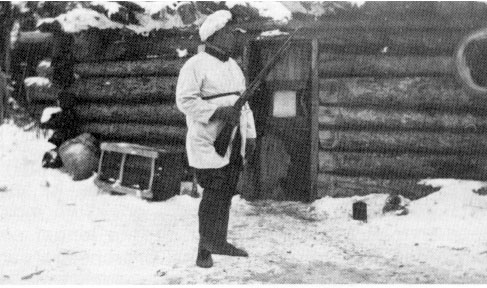 John Salmon in his hunting suit. 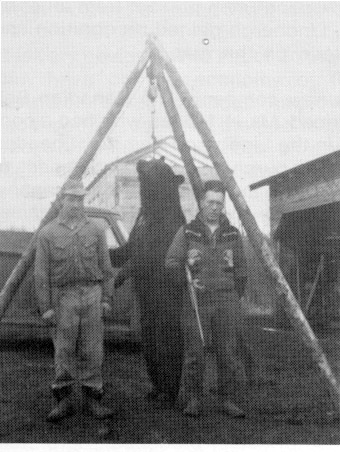 Billy Zapesocki and Arnold Ockerman beside a black bear he shot. 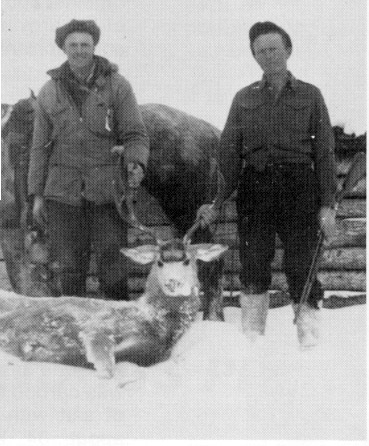 Carl and Edward Nelson after a successful deer hunt.

When the homesteaders arrived, there were thousands of non migratory game birds, such as, Prairie Chickens, Partridges, Hungarian Pheasants, and Ptarmigan. There were also large numbers of migratory game birds that stopped within the area, usually for a short time to rest and feed, when on their flights north to their nesting grounds during the spring season, and again on their return flight south in the fall. These birds consisted of Green Head Ducks, Branta small goose; the Canadian Geese, and at least two species of Cranes. 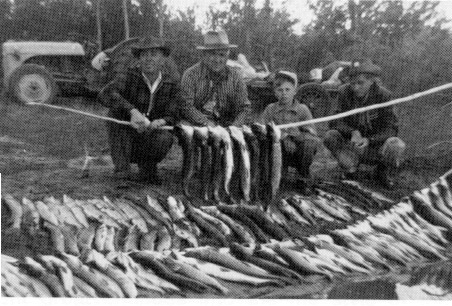 Fred Lorenson, Arthur Wise, Charles and Neil Nelson with a catch to be envied. 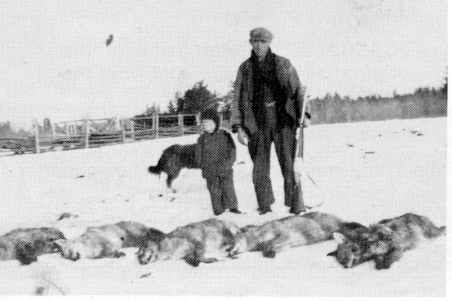 John Hillebrand and Eddie with a number of couotes he shot.

The survival of most of the homesteaders was dependent on the supply of all this wildlife for meat. No one who could hunt would have had any need to go hungry. Trapping of the fur bearing animals gave many of them an opportunity to supplement their meager income.There were also hundreds of acres of Blueberries, Cranberries, Saskatoons, Strawberries, High Bush Cranberries, Choke Cherries and Raspberries that produced more fruit each fall than was ever harvested. 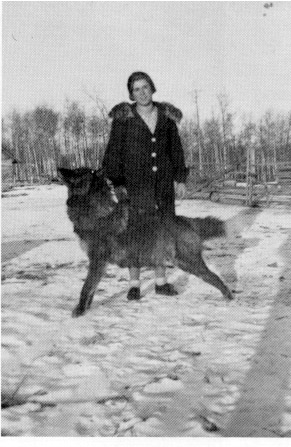 Mrs McConnel with the wolf she had killed.

Present and future generations shall never know, and it is almost impossible to visualize, the lavish supply of many necessities of life that were available at that time. As settlers cleared land and development of the area continued, wildlife became scarce. However, some hunting is still done here at the present time but this is restricted to the hunting season only and governed by the Game Laws.