East of what is the present Ferguson Flats district, extending to the Frog Lake Indian Reservation,is the community known to us as Primrose. However when the first settlers came this whole area was referred to as Ferguson Flats and was so marked on the early maps. With the organization of the Middle Creek School District in 1921, this name was used to refer to this area. The name Primrose was chosen much later with the establishment of the post office. 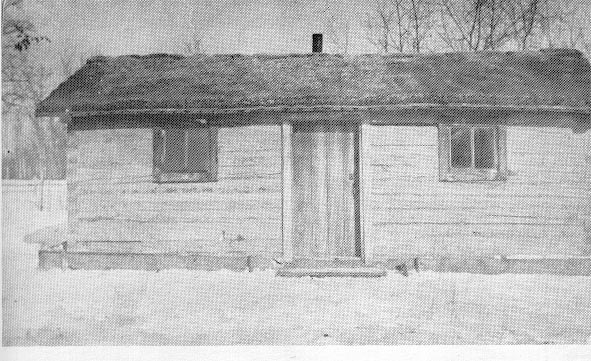 William Saranchuk's first home, one of the first in the district

Life was not easy. Survival here depended on one's resou wildlife for meat as deer, rabbits, ducks, and partridges were plentiful. The lakes to the north, later to be known as Gamier Lakes, named after the family who pioneered near there, provided everyone with an abundance of fresh fish. Wild berries in the summer and their own gardens supplemented their diet. No one depended on stores except for the basic essentials. All freight had to be brought in from Kitscoty or Vermilion by oxen.

Open spaces of land were the first to be brought under cultivation and this was done with a team of oxen and a walking plow. The flies and mosquitoes in those days were extremely vicious and a constant irritation to man and beast. Many a story has been told about incidents where the oxen chose reprieve from their duties by taking off into whatever direction they could to find a slough or some form of shelter for protection. Smudges were necessary to ward off mosquitoes at night from the livestock and homes. Little by little the settlers cleared more land. Prairie fires were common. Early frosts brought disaster to many a crop. 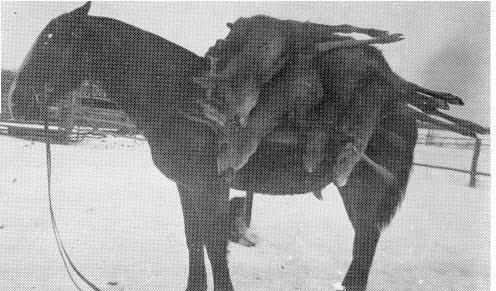 Wild game was plentiful as indicated by this load.

In the twenties more families began arriving. Those who came as bachelors would venture out and come back with their brides. Many of them had to learn the new language, adapt to new customs, and adjust to the climate and many other hardships. Those who came alone, filed their homestead, worked on it for a short while and went out elsewhere to work to earn some money in order that they could buy some equipment and livestock to farm with. Most of them built a log shack to keep them out of the cold and wet, and later a barn. Some sent for their families.