Reminiscing about forty years ago

It was the year 1932 and I was very pleased to find a little rustic school called Fern Chapel, so far north of my home at Mannville. It was only three miles north of my younger brother's, Fred Lorenson, farm. This gave me the privilege of a place to stay.

My horse, Black Beauty, carried me to school and back each day, a distance of six miles. Sometimes I picked up Jackie Simpson, who was one of my little pupils, and he rode behind the saddle. Being a newcomer myself, I asked the pupils what school was next north of Fern Chapel. Their reply was "None", which was quite true as there was no other school for miles to the north. 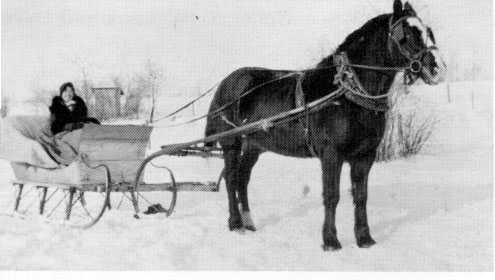 Miss M. Lorenson ready to drive to school with her horse Black Beauty. 1933

I found the small school very limited for space, especially in the winter when the older boys had little room to stretch. This problem was partly solved when I bought a football fqr the boys' Christmas present. Surprisingly, the big boys played football all winter, the temperature being 2O-3O below at times. Some of these boys were; Edward and Carl Nelson, Carl and Melvin Ockerman, Ernest and Arlie Bartholomew, and Daniel Allen.

Then I remember the wonderful co-operation of the pupils at Christmas time. They were all so willing to take part in the program. To entice the pupils to do their best, the Imperial Lumberyard at Lindbergh, with Vic Ramsbottom in charge, came to watch the program. He presented a prize to the best actor and actress. Receiving prizes one year, I recall, were Irene and Edward Nelson. He received a jackknife and Irene a doll.

At the end of June examinations, I and the grade seven and eight pupils borrowed a team and wagon from my brother Fred. We then set out for the ferry crossing on the North Saskatchewan River. It would be about nine miles from the schoolhouse, which was quite a distance in those days. The boys built a bonfire, overlooking the river and the girls helped prepare the lunch. Then the ferry operator took us all across and back again. This was the first ride some of the pupils had ever had on a ferry. A few of the pupils names that I remember are: Ernrna and Ella McClain, Beulah and Edward Nelson, Carl Dahlgren and Ernest Bartholomew.

Once when the roads were very icy and slippery and some of the pupils were playing on their way home from school; they thought I had been killed when they saw my horse slip and fall on me. But when I was able to climb back on Black Beauty, the pupils, a short distance ahead, ran for home. That was one time when teacher had caught them loitering!

Ball games with Middle Creek school were of interest to all. Not only the pupils enjoyed these gettogethers, but others in the district too. We also enjoyed picnics together. Well, school days always have some 'ups' and 'downs'. Everyone is not always pleased with everything. But what a blessing to remember and meet again and bring to mind the past pleasant things. I taught two years at Fern Chapel. I married Pete Moren and we have one son, Roger. We are all residing in British Columbia at this time.